Orville Brown | Should Seaga be made a national hero? 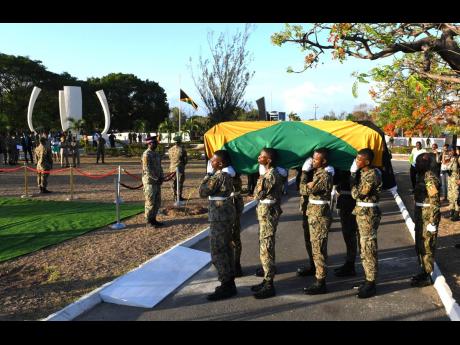 Ricardo Makyn
Members of the First Battalion Jamaica Regiment (1JR) bearer party at the rehearsal ceremony at National Heroes Park for the internment of late former Prime Minister Edward Seaga on Friday, June 21. The funeral will be held at Holy Trinity Cathedral today. 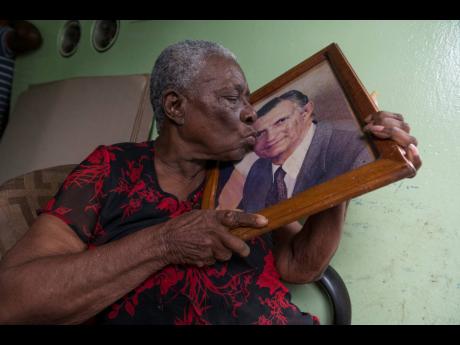 Gladstone Taylor
Daisy Smith, 87, a resident of Tivoli Gardens, kisses a photo of her old friend, employer and former member of parliament, Edward Seaga, on Tuesday, May 28, 2019, the day he died.
1
2

A hero is a person who is idolised and admired for wisdom, courage, achievement, noble qualities or personal sacrifice. All people have a deep psychological need for these exemplars of what is good and goals that should be striven for.

Heroes help us to identify and define ourselves, give us emotional elevation, a sense of purpose, and inspire us to transform our circumstances. Heroes create community identity and solidarity and through their lives inspire others to emulate their sacrifice and heroism. The adulation of heroes began with the Ancient Greeks and the term itself is of Greek derivation. The names are well known: Hercules, Perseus, Achilles, the last being a mighty warrior and the hero of the war between the Greeks and Trojans related in Homer’s Iliad.

Throughout the ages since then, other heroes have marched on to the world stage as liberators, martyrs, inspirational leaders, nation builders and prophets, all in some way an embodiment of the national ideal. Some have had their stories told in great detail but others are folk figures, “an expression of the collective memory of the people”, which is the way the brilliant Caribbean scholar, Edward Kamau Brathwaite, in his famous 1977 pamphlet, made the case for the installation of Nanny of the Maroons as a national hero.

Beginning with Marcus Garvey in 1964, our country has recognised seven national heroes, Garvey being an inspirational leader not only to Jamaicans but to the black people of the world. After 1964, but not in the order laid out, were added, Samuel Sharpe, the great liberator of his people, G.W. Gordon, and Paul Bogle, who at the sacrifice of their lives sought to end the economic, social and political enslavement that followed Emancipation, and in our own times, Alexander Bustamante and Norman Manley, who led the people on the path of nationhood. The question has arisen since the turn of the 21st century as to whom, if anyone, should be added to this roll of the highest national honour, and cases have been made for Michael Manley for having championed the working class, Bob Marley for having been the prophet speaking against injustice and for the aspirations of the people, and, more recently, whether the late Edward Seaga is deserving of the title for his role in the building of our nation.

In a caustic article aimed at “revisionists” who either want to deify or demonise Seaga, Dr Alfred Dawes suggests that it would be premature to do so and that quite a few more years must pass before Seaga’s case can be considered. He ignores the fact that men have been made heroes in their lifetime – Martin Luther King, Mohandas Gandhi, Nelson Mandela and Alexander Bustamante, so there is really no good reason why the former JLP leader and prime minister should not be considered.

His 15-year removal from the arena of political conflict has allowed much, if not all the mud thrown at him to be removed, his maintenance of a dignified presence in national life since 2004, and the tremendous outpouring of grief at the news of his death all allow for a convincing case to be made. His wisdom, courage, achievement, character and sacrifice (on sacrifice, see Ronnie Thwaites’ article), are not in doubt and the question answered in this article is whether the quality of his contribution to the building of this nation completes a compelling case for his elevation to the status of the heroic.

In raising the structures that support our nationhood, Edward Seaga has been the incomparable master builder. He established the financial infrastrucure in a dozen institutions from the Jamaica Development Bank to the Agricultural Development Bank, and physical infrastructure through the Urban Development Corporation (UDC). That firm gave the country Portmore, renewed the foreshores of Kingston, Montego Bay and Ocho Rios, and created a new tourism experience at Negril.

Initiatives in child development, youth development, and community development came out of his vision, and he broke new ground in building our national identity. In 1964, at the reinterment of Marcus Garvey, he said that the recognition of Garvey was more than simply the creation of a national hero. Of the act, he said, “It is intended to be part of the building of our national identity, of embracing the life and work of great men who broke the chains and shackles of plantation slavery, and then liberated us from the prison of a mental slavery. Great men taught us to define ourselves as free people of equal stature to all and endowed with a rich heritage in which there is no longer weakness but strength.”

He went on to encourage Jamaican music and folk culture and brought in from the outhouse the Revival movement, our umbilical link to Africa, which had been shunned by the leaders of society. These acts, more than anything else, made lower-class Jamaicans feel that they counted and were entitled to respect. A former political adversary, Dr Trevor Munroe, was effusive in his praise of Seaga’s enlargement of freedom in our country through the Electoral Advisory Commission (1979) and the Charter of Rights ( 2011).

In that same caustic article against “revisionists”, Dr Alfred Dawes rejects my suggestion that Seaga had a hand in bringing down racism in South Africa, so I was pleased to see my same point being made later on, in another paper, by a man I never met – Sir Ronald Sanders, Antiguan representative to the United Nations.

No other political leader in Jamaica has touched and enriched so many aspects of our national life as Edward Seaga. By the definition of the word ‘hero’, offered at the beginning of this article, and by his incomparable contribution to nation building, Edward Seaga is qualified to be our next national hero. There are some, of course, who seek to dispute this claim by reference to his alleged role as the author of political violence, but it was always a preposterous notion that West Kingston, the last urban refuge of JLP supporters, could hold the initiative in violence and intimidate the six well-armed PNP garrisons that surrounded it – East Kingston, Central Kingston, South St Andrew, South West St Andrew, Western St Andrew and East Central St Andrew.

Because the claim was preposterous, Seaga felt that it never deserved an answer, but it became gospel to his adversaries and to some others who didn’t know better.

Edward Seaga came to office as the best prepared of our prime ministers after his 1953 sociological study of peasant life in Buxton Town, St Catherine, and downtown slum life in Salt Lane. With preparation added to great love and humanistic vision, he became arguably the best of our prime ministers. While the critical observer might want to discount praise offered by a man’s admirers, it is harder to do the same thing against a man’s adversaries, and the tributes from former Prime Minister Patterson and former WPJ leader Trevor Munroe must be taken at full value for their honesty and obvious sincerity.

There is also another source that compels attention. In late 1961, Premier Norman Manley was sitting in a meeting of the party’s national executive committee to look back on the serious reverses suffered by his government in the haves and have-nots debates and the defeat in the referendum on federation.

At one point, he felt called upon to answer an unkind reference to Edward Seaga as “dis hurry-come-up Syrian bwoy”. Manley quietly responded, “If I had two more men like him, I could really transform this country.” Seaga did transform the country and he deserves to be named a national hero.

n Orville Brown is a former JLP local government representative, and is now a teacher and writer living in New York and editor of a collection of speeches by Edward Seaga titled ‘The Service of My Love’. Email feedback to columns@gleanerjm.com and thewriter.brown@gmail.com.