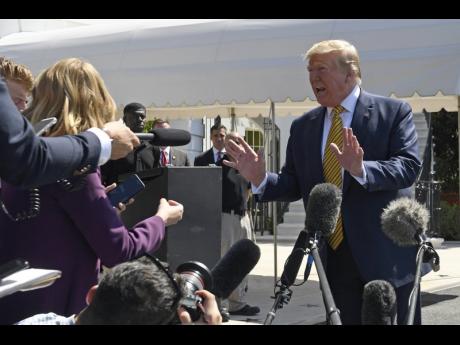 Trump...speaking to reporters at the White House yesterday after his decision to halt mass deportations.

United States (US) President Donald Trump has temporarily halted a series of planned operations to remove hundreds of people living in the US illegally.

The operation is on hold for two weeks, Trump revealed yesterday, to give lawmakers time to craft a solution to the problems at the US southern border.

“At the request of Democrats, I have delayed the illegal immigration removal process (deportation) for two weeks to see if the Democrats and Republicans can get together and work out a solution to the asylum and loophole problems at the Southern Border,” Trump said in a message posted on Twitter.

“If not, deportations start!”

The operations were set to start yesterday in a number of states, including New York and California, leaked documents have revealed.

According to reports, approximately 2,000 persons with final removal orders were targeted.

News of the planned operations triggered panic and outrage in several cities.

In New York City, officials offered legal assistance to persons impacted while authorities in other states indicated that their police department would not cooperate with federal agents carrying out the operations.

Immigration advocates raised concerns that some of the persons targeted have had their cases fast-tracked by the courts.

Trump’s decision to halt the operations came hours after a telephone conversation with House Speaker Nancy in which she reportedly urged him to call of the raids.