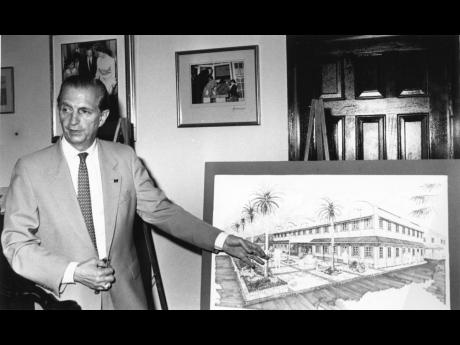 Gleaner Photo
In this 1994 photograph, Edward Seaga, then leader of the Opposition, explains features of the planned Jamaica Music Museum and Music Hall of Fame to be located in the old Wray and Nephew building between Church Street, Port Royal Street, and Temple Lane in downtown Kingston during a press conference. Seaga had an undying respect for culture and heritage in all its forms, says his niece, Rebecca Tortello. 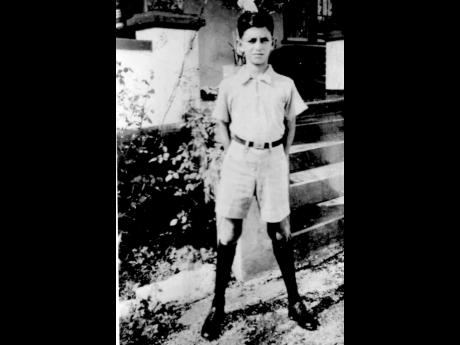 x
Edward Seaga during his boyhood. Even as a boy, Seaga was known to have a curious mind, writes his niece, Rebecca Tortello. 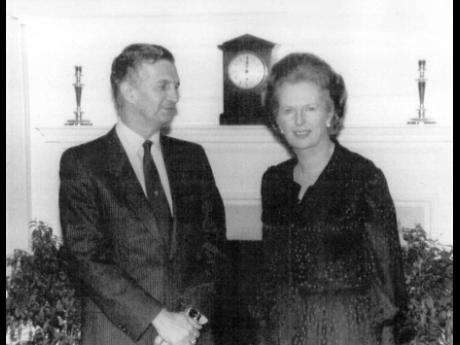 x
Edward Seaga was known to keep photographs of momentous occasions, including photos with his interactions with the famous. Here he is photographed meeting with British Prime Minister, Margaret Thatcher in the 1980s.
1
2
3

One of the stages one goes through when grieving the loss of a loved one is trying to find meaning and accept the loss. I have had to do this a few times in my life: enduring the loss of my parents, a close friend, and other close relatives. Once again, I am on the journey towards acceptance with the recent passing of my uncle, but this time, the meaning of the life lived is all around me as I move through my daily life. His contributions to Jamaica’s development are well known and, in many respects, immeasurable. Over the last few weeks, almost everywhere I have gone, people I know and people I have never met have stopped me to express their condolences and share their own memories of him engaging with them when they were children and when he was on the campaign trail, or to share their thoughts on his work. Friends have said: “He saved the nation from drowning and will never be forgotten,” and, “What an unfillable debt we owe him. He was the saviour of Jamaica, no less, and he did more for the country than any other politician before or after.”

In recent years, I have had the honour of being asked to ­introduce him at various events, and the challenge was always deciding what to choose from the vast array of his accomplishments, given he either led or participated in many of Jamaica’s national economic, legal, social and cultural institutions. I have been trying to come to terms with this heavy loss of the man who was like my second father and the acknowledged patriarch of our family – in many ways the glue that connected the many branches of the family tree. And so I have come to take some comfort in the things I admired most about ‘Uncle Eddie’. He was a thinker and a scholar and one who was deeply committed to Jamaica and to nation-building, but I think it was his undying ­curiosity and his interest in surrounding himself with people, information and experiences that satisfied his thirst for knowledge that struck me the most. In his later years, he was fascinated by new scientific evidence of just how powerful the early years of life are to child development. He sent me books he had enjoyed on this topic following the birth of my son, and from time to time we would discuss our ideas on how to work towards strengthening the early-childhood system in Jamaica, which he championed in calling for a task force on early-childhood reform in 2004.

My mother always told me that her older brother was curious from childhood and that from time to time I reminded her of him with the many questions I asked – that was not always a good thing to her! Even as a child, he read widely and kept stacks of newspapers and books everywhere, much to my grandmother’s dismay. He appreciated art of all kinds and enjoyed listening to folk tales and to as many different types of music as he could. He loved sports of all kinds because he liked beautiful things – and to him, the grace of athletes was a form of beauty. Going to a football match with him was always entertaining, not just for the football but for the many ­comments he would make while the game was being played. As he got older, Uncle Eddie loved technology and often enjoyed trying out different gadgets, ­perhaps none more so than cameras as he dubbed himself not only the official keeper of the family photographs but also the main family wedding photographer.

The uncle I knew and loved could be impatient at times, but that was usually with ­people who were not living up to his sometimes exacting standards. He had a dry wit which he showed often among his family and revealed in some of his sayings on the ­political stage. He had a no-­nonsense, get-to-the-point style of ­interaction, which often led him to be ­misunderstood but also fuelled his sense of humour, which ­occasionally led to him laughing at himself. Uncle Eddie always paid a tremendous amount of attention to detail – even to things that you would have thought would have been of no concern to him. When I was getting married, for ­example, he asked me to send photos of the dresses I was considering, and he shared his opinion – quickly ­throwing out some of the dresses I had quite liked. I asked him why he was so interested and he said he was always interested in things of beauty and weddings were certainly to be that – none more so than the bride!

Earlier in my life, when I was about to finish high school, he called me to join him for lunch and proceeded to explain research he had done on different schools he thought I should consider while preparing to do what he assumed I would, which was to follow in his footsteps to Harvard Yard. His faith in that, and in me, in many ways, spoke it into being and changed the course of my life. In that I know I am not alone, as countless numbers of people have shared stories about ways in which meeting him or working with him had changed their lives. Such was the force of the man I am proud to call my uncle.

When he left Jamaica for Harvard College he revelled in the opportunity to explore more open-ended subjects, such as sociology, which became the subject of his heart and went on to define much of his life’s work. His interest in this never dimmed, as we would speak from time to time about my research during my undergraduate and graduate studies, because I often focused on Caribbean-related topics. I actually examined an award-­winning poem he wrote and submitted anonymously to the Jamaica Journal called ‘River Spirit’ which showed his love of, and respect for, the enigma of revivalism. He read and reread it sending many thoughtful comments and suggestions. Needless to say, I got an A on that paper and the university inquired about subscribing to the journal.

It is well known that when Uncle Eddie returned to Jamaica he was moved by what became an undying respect for culture and heritage in all its forms to begin conducting his own research into rural and urban folklore and religious practices. It may not be so well known that, not only did he write down his observations, he began to ­collect objects linked to all that he learned. When he entered politics in his late twenties he also decided to begin keeping documents – the papers he wrote and the sources he used and the material he was given, as part of the group that wrote the Jamaican Constitution and so many other important, wide-ranging and far-reaching policies and pieces of legislation. Some of these, like his million trees campaign (now a recognised action for fighting Climate Change), are largely forgotten, but were well ahead of his time. He also kept photographs of regular and momentous ­occasions such as domino sessions in communities, visiting with the young and the old, political rallies, meetings with heads of state and other dignitaries, as well as interactions with famous people, including Michael Jackson and Mohammed Ali. His interest in collecting never waned and his foresight and thoughtfulness ensured that this substantial ­collection of material that encompasses data, historical record and his own thoughts and ideas, was handed over to the University of the West Indies to be properly preserved and made accessible to all those interested in Jamaica’s development in perpetuity.

Look out this week for part II of her reflections on her uncle.