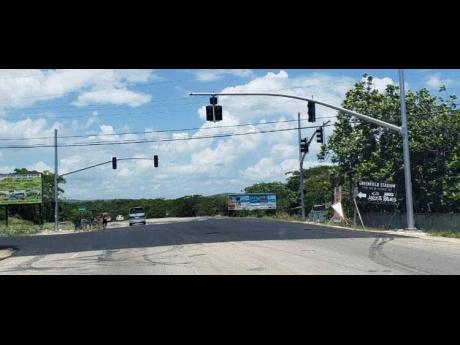 Although the physical structure for Trelawny’s first traffic lights has been erected, another $15 million is needed to make the lights, which are located at the North Coast Highway- Daniel Town intersection, functional.

E.G. Hunter, the chief executive officer of the National Works Agency (NWA), says the funding is part of $65 million provided to improve safety along the North Coast Highway. The project is being done under the direction of the NWA.

Hunter said the NWA will focus on putting in additional safety features along the busy thoroughfare, which has been the scene of several fatal crashes in recent times.

“We will be embarking on a $50-million road marking and insertion of cat eyes from Runaway Bay in St Ann to Fisherman’s Inn in Trelawny in short order,” said Hunter. “While this will not be the end of the road-marking exercise, it is the extent of what the allocated funds can do.”

Hunter went on to state that the NWA is fully committed to making the North Coast Highway as safe as possible for those who use it.

“We at NWA regard the safety of our road users and will continue to treat with importance the safety of those who use our roads,” said Hunter.

While not providing a timeline for when the traffic lights will be be put into operation, Hunter expressed optimism that they would soon become functional, although he acknowledged that they have missed deadlines.

“We have the $15 million that is needed to complete the installation of the traffic lights.

I know we have missed promised deadlines in the past, but except for a government inspector’s green light for the commissioning of the lights, we are ready,” stated Hunter.

Member of Parliament for North Trelawny Victor Wright has welcomed the news.

“It is a good first step towards improving the traffic flow in the parish. This is especially so because since the closure of the Rock Bridge, the pedestrian flow within the area [ has been affected],” said Wright.

“However, while I welcome this expenditure, I still cannot understand the NWA’S silence on the roadway between Falmouth and Springvale, which has issues to be addressed,” Wright said.