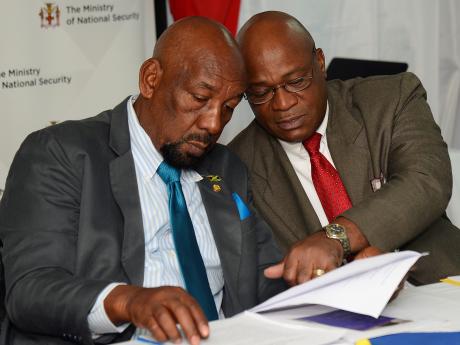 Rudyard Spencer, Minister of State in the Ministry of National Security, (left) and Lieutenant Colonel (Retired) Gary Rowe, the Commissioner of Corrections, discuss the Electronic Case Management System at a launch of the training phase held at the Department of Correctional Services Training Centre in Kingston on June 25, 2019 - Ian Allen photo

The government will roll out an electronic case management system for the island’s juvenile correctional facilities in September.

Correctional staff will begin training of the system this Friday.

The Department of Correctional Services has been using a paper-based version of the electronic system since March 2018, which was developed following several consultations with stakeholders and partners.

The training phase of the project will sensitise stakeholders on how to use the new system.

Speaking at today’s launch of the training phase, the department’s Director of Corporate Communications, Dexter Thompson, urged key stakeholders to properly use the system.

"If we do not get it right with the children we are in big trouble. This system will aid us in getting it right."

Country representative of the Organization of American States, Jeanelle Van Glaanenweygel, told journalist, “by Friday the system should be operational in all facilities and users should be able to continue using and testing it. User feedback will be vital to guide the next programming phase which will be finalised by September 2019 when the case management system in juvenile facility will be officially launched.”

Rudyard Spencer, minister of state in the Ministry of National Security, said that the introduction of the electronic system is another step by the government to better monitor and provide assists to offenders.