‘Loved him from the first time I saw him’ 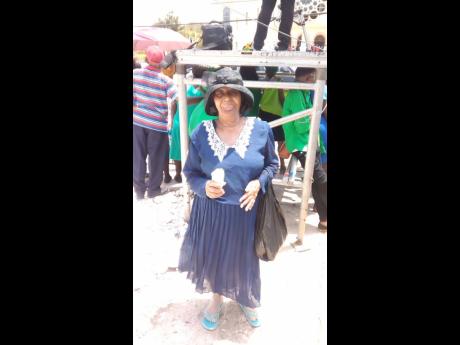 Jason Cross
Seventy-year-old Elizabeth Edwards was determined not to miss ‘Uncle Seaga’s’ funeral on Sunday, June 23, even though she had no invitation and was not allowed on the grounds of the Holy Trinity Cathedral on North Street in Kingston. She stood among huge crowds just across the street from the church, behind barriers.

As Jamaicans said goodbye to former Prime Minister Edward Seaga on Sunday, among those braving the scorching heat to pay their final respects was 70-year-old Elizabeth Edwards.

“I came to attend Uncle Seaga’s funeral. I love him from the first time I saw Mr Seaga at a function in Tivoli Gardens, when he just became prime minister,” she told The Gleaner of the man who served as member of parliament of West Kingston from 1962 until his retirement in 2005.

“I always listened to his speeches on the radio and the TV, and I always feel good seeing and listening to him,” Edwards added.

Greenwich Town resident Delroy Clarke was delighted at the pomp and ceremony of the procession as the body of the former prime minister was taken on the two-kilometre journey from the Cathedral of the Most Holy Trinity on North Street to National Heroes Park for interment.

He had also taken with him a framed photograph of a young ‘Eddie’, which he said had been hanging in his house for decades and was only taken down for the occasion.

The procession drew hundreds of onlookers who waved goodbye as the gun carriage bearing the coffin rolled by, some capturing the moment on smartphones.

“I am walking this close to the hearse because he is the greatest of all time,” St Andrew resident Alton Davis told The Gleaner.