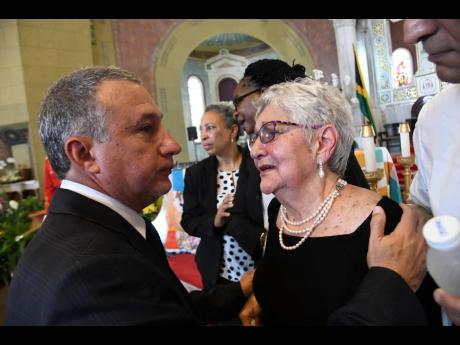 Rudolph Brown/Photographer
Metry Seaga greets Jean Anderson, sister of former Prime Minister Edward Seaga, at Sunday’s state funeral at the Cathedral of the Most Holy Trinity in Kingston. Metry paid tribute to the late statesman, his cousin, during the service. 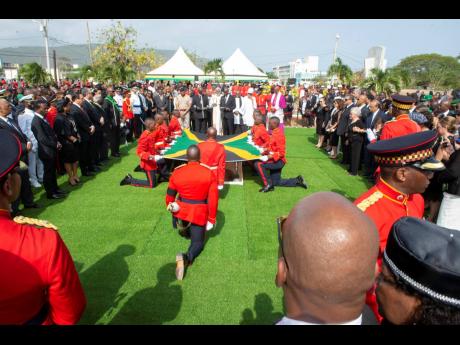 Gladstone Taylor/Multimedia Photo Editor
Members of the First Battalion Jamaica Regiment bearer party remove the flag from the coffin of former Prime Minister Edward Seaga before it is lowered into the grave at National Heroes Park on Sunday.
1
2

At Sunday’s funeral for former Prime Minister Edward Seaga, his cousin, Metry Seaga, told mourners that the former lawmaker had made tremendous personal sacrifices in serving the country for more than four decades.

Speaking during the service at the Cathedral of the Most Holy Trinity in Kingston, Metry said that although the former prime minister had loved his family and wanted to be with them, he was also committed to giving his all to the people he represented. And the family was understanding, he said, as they cherished the moments he got to spend with Seaga as he laid blocks in helping to shape post-Independence Jamaica and his political career.

“As a young boy, I was sharing a stand in the bird bush with him and looking over at him in his green, one-piece suit. He was standing in one of the deepest, dirtiest swamps in Jamaica, and of all the things to be doing, I looked over and saw Uncle Eddie combing his hair,” Metry shared. “A bird popped through and I hurriedly marked him. He (Seaga) swivelled, got stuck in the mud and splashed. He was covered in mud from head to toe.”

Metry further reasoned: “Even though he was the prime minister, when he was with us, he was just one of the guys, and that gave him a break that I think he really treasured.”

He said Seaga taught his kids to live so that they would be able to “look at themselves and sleep well at nights”.

“He said to them: ‘Do the right thing, even if it’s not the popular thing, and be humble doing it.’”

During the tribute, Metry read a missive written by Seaga’s youngest child, Gabrielle, in which she promised to make him proud.

“You have been my hero and a wonderful father. I’m thankful for the experiences and memories that we shared and for all that you taught me – like how to fly a kite, and some museums,” the teenage Gabrielle said. “Daddy, you taught me the importance of education, and at times helped me with my homework. I learned from you the importance of nature and how to improve my swimming. I love watching documentaries about history with you and I learned so much about music like reggae, ska and even classical music. Daddy, I am going to make you proud.”

As it was being read, Seaga’s widow and Gabrielle’s mom, Carla, was moved to tears. Gabrielle held her in a tight embrace as they mourned the giant of a man who meant so much to them.

In his tribute, Prime Minister Andrew Holness recalled himself being recruited into Seaga’s fold as a youngster studying at The University of the West Indies, Mona, and how he found the then Jamaica Labour Party (JLP) leader quite different from the public image that had been painted of him.

He said that during that time, he learned of Seaga’s pragmatic approach to development and economic policies as a visionary and big thinker.

He gave anecdotal interactions with Seaga and said that the former prime minister was contradictory at times, as while he was portrayed as a capitalist, he never lost sight of his political mission of helping the poor to join the ranks of the wealthy.

Holness said that after he succeeded Bruce Golding as the leader of the JLP, Seaga met with him and urged him not to forget the less fortunate.

“Mr Seaga himself and the JLP have always been caricatured as capitalists and sometimes, even by our own rhetoric, we reinforce the narrative. However, Mr Seaga never lost sight of the reason why he entered politics – to help the have-nots join the ranks of the haves,” Holness said.