American students log on to US version of Schools’ Challenge 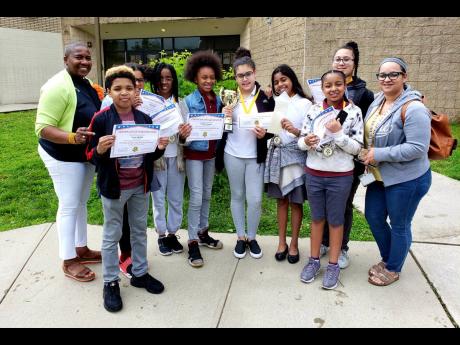 “How many minutes are there in four weeks?”

That was the first question in round one of the finals in the USA Schools’ Challenge Quiz Bowl Competition.

“40,320 minutes,” a young teenage girl from the Johnnie L. Cochran Junior Academy fired back correctly at the quizmaster, with barely a few seconds elapsing between question and answer.

The match took place last Thursday at the Mildred Barry Garvin School in East Orange, New Jersey. It was the culmination of a few weeks of mental preparation among six schools that were competing for the first time to test their skills in language arts, mathematics, science, social studies, world languages, sports, technology, world affairs, and of course, their lightning-fast speed with the buzzer section.

The Schools’ Challenge Quiz Bowl Competition was created by a Jamaica-born educator, Narda Morant, who grew up in Jamaica watching the popular competition on JBC (Jamaica Broadcasting Corporation), now defunct, with the late Dennis Hall as quizmaster. Morant attended Manchester High School in Jamaica and when she visits the island, she still watches the quiz on TVJ. She was convinced that she could bring some of the intellectual frenzy that the local quiz creates to American schools.

Narda, who got diverted from politics to education, had previously conducted quiz competitions at the school she taught, and as such, creating and managing the competition to involve other schools was a task she was able to accomplish with relative ease.

Sponsors moved swiftly to offer prizes, including PNC Bank, The Bass Foundation and Starbucks and Village Markets. And in a community whose demographic make-up is about 50 per cent Caribbean, Golden Krust, a leading Jamaican restaurant chain, also provided sponsorship for the competition.

The format of the American version is slightly different from the Jamaican competition. There are four rounds, including a visual section where questions are written, so if both teams write the correct answers, both teams get a point. And, two of the rounds have buzzer sections where teams are penalised for incorrect answers.

Local customs come into play, too, so in a multi-ethnic society with many belief systems, there is no Bible knowledge section. Also, each team has six players, not four, and team members are younger, mostly fourth and fifth graders for the inaugural year.

The eventual winner of Thursday’s final was the Johnnie L. Cochran Junior Academy, who defeated a hybrid team of two schools, Parks & Garvin, by 18 to 14 points in a nail-biting match.

All the matches were recorded for local access television stations, and the goal is to spur on “families” to talk about education, competition, school pride, and to elevate the narrative about how students learn and what they learn.

“I believe that our inaugural Schools’ Challenge Quiz Bowl USA 2019 was a great success,” Narda Morant told The Gleaner. “The district supports it and the students are highly motivated and competitive. Many teachers are seeing the bigger picture, in that the game format can be used to engage some students who would otherwise ‘check out’ of the conventional learning system, and the students can’t wait for the next rounds of matches to begin in 2020”, she added.