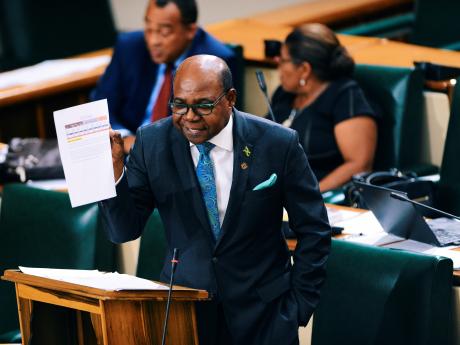 The House of Representatives on Tuesday passed the Tourism Workers Pension Bill which seeks to establish a defined contribution pension scheme for hospitality industry workers.

The Bill, which was piloted by Tourism Minister, Edmund Bartlett, was passed with 11 amendments.

Bartlett, who closed the debate on the legislation, said the scheme will be the largest single pension plan in Jamaica and, arguably, the Caribbean, and a landmark development for the country’s workforce.

“It will involve in excess of 300,000 workers which will represent one-fifth of the total workforce of Jamaica. That accumulation of affordable capital will present an opportunity for investment and for capital distribution for all sorts of development in the country,” he said.

Bartlett argued that the Bill and, by extension, scheme is coming at time when the sector is experiencing unprecedented growth.

“Globally, the trends are there that 1.4 billion visitors are going across borders; last year, they spent US$1.7 trillion in more than 200 countries. You recall that here, in Jamaica, we broke all records, and last year, we had US$3.3 billion earned from just over 4.3 million visitors,” he said.

The legislation will come into effect by an appointed day notice made by the Minister and published in the Gazette.

The pension scheme will require mandatory contributions by workers and employers, with benefits payable at age 65 years or older.

The scheme’s establishment is consistent with the Government’s focus on creating a social security network within the tourism sector.

It is one component of a three-point human capital development plan for industry workers, which also includes training and capacity building.

Some of the persons who will benefit include: rafters, craft traders, bus and taxi drivers, spa operators, housekeepers, and groundsmen who are not directly employed in tourism, and are self-employed in some cases.