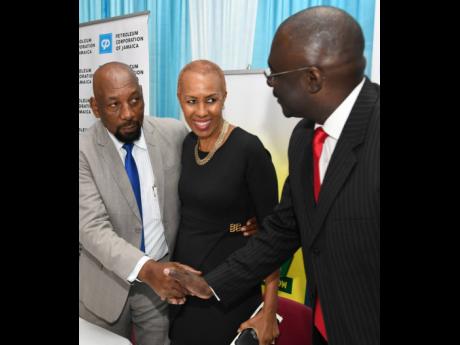 Rudolph Brown/Photographer
Rudyard Spencer (left), state minister in the Ministry of National Security, greets Assistant Commissioner of Police Warren Clarke as Energy Minister Fayval Williams looks on at yesterday’s contract signing of major energy efficiency air conditioning projects to be implemented at police facilities by the Petroleum Corporation of Jamaica (PCJ). The even was held yesterdat at the PCJ Auditorium on Trafalgar Road in New Kingston.

The Jamaica Constabulary Force (JCF) and the Petroleum Corporation of Jamaica (PCJ) have inked an agreement to retrofit air-condition systems and improve energy efficiency at three police facilities at a cost of $126.5 million.

The contract was signed at the PCJ building in New Kingston yesterday between the Government and Geddes Refrigeration Limited, which is tasked with the installation of air condition solutions at the JCF’s Mobile Reserve Headquarters, the May Pen Divisional Headquarters in Clarendon, and at the National Police College in Twickenham Park, St Catherine.

Under the contract, all the facilities will benefit from the installation of energy-efficient air-condition systems that utilise variable refrigerant flow technology, designed to regulate airflow in response to building occupancy and conditions.

The preferred solution also includes a state-of-the-art web-enabled building-management system, which will be used for monitoring and verification of data as well as cool roof solutions.

At yesterday’s signing, Energy Minister Fayval Williams said that electricity usage would decrease by some 63,000 kilowatt-hours (kWh) per year at Mobile Reserve alone when the system becomes operational in 12 months.

“In addition, it will also decrease the electricity used at the May Pen headquarters by 60,600kWh per year and just under 100,800kWh at the National Police College,” she said.

“By improving energy efficiency and conservation at the JCF facilities, we are demonstrating and encouraging responsible energy use that can be adopted by the wider society,” he said.

Assistant Commissioner of Police Warren Clarke said that the JCF was grateful for the PCJ’s assistance in helping it become more energy conscious.

The regional headquarters in Constant Spring, St Andrew; Spanish Town, St Catherine; and Portmore, St Andrew, along with the Police Forensic Laboratory (Institute of Forensic Science and Legal Medicine), participated in the Energy Retrofit Pilot Project, the catalyst that transformed the JCF’s energy-management programme according to Clarke.

The EECP was established in 2011 to promote cost-saving measures in the public sector, the design and implementation of energy efficient equipment, and conservation interventions.