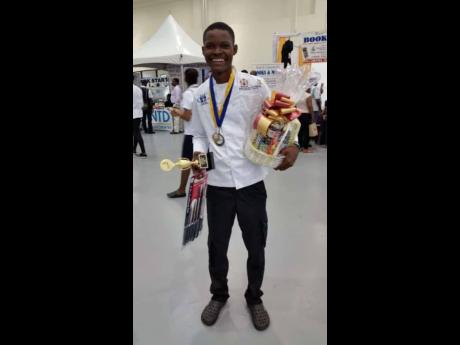 Vere Technical High School fifth-form student Stevol Morrison is one excited teen after leading a delegation to Florida to the World Skills Competition as junior chef.

Morrison, one of 13 finalists representing Jamaica, is the only member of the team still in high school.

He entered Taste of Jamaica/WorldSkills Competition competing in the Junior Apprentice Chef Category, and was awarded first place for presentation and taste and second place for floor judging (knife skills, hygiene standard and cooking techniques).

Morrison was invited back to a cook-off round to compete with senior chefs in order for the organisers to select a team to represent Team Jamaica at the World Skills Competition, which started June 20 and ended yesterday.

Speaking with The Gleaner on the penultimate day of the competition, Morrison said the experience was more then he could have imagined.

“It has been a great opportunity for me. I’ve learned a lot from the different Caribbean countries, and being able to be a part of that, it’s really a pleasure. I’m excited to see what will be the outcome,” he said.

Morrison said it was an honour to be a part of team Jamaica as, “teamwork makes the dream work”. He said the aim is to execute to the best of their ability and look for the results.

He said his passion for hospitality started at a tender age.

“I started getting compliments on my cooking, especially after I won the Taste of Jamaica competition. That gave me the urge to push out more into competitions along with my food teacher, Mrs MacKinnon of Vere Technical, who helped to motivate me along the way,” he said.

Morrison said his ultimate dream is to own a restaurant and be a food scientist.