44 persons sworn in as Jamaicans 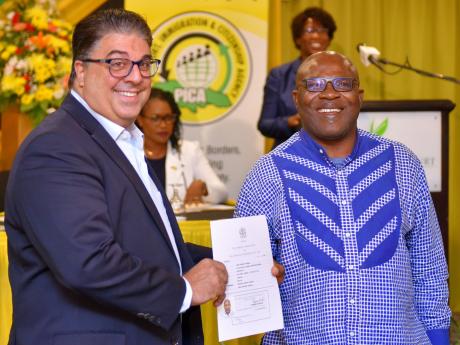 An additional 44 foreign nationals living in Jamaica have been granted citizenship by the Passport, Immigration and Citizenship Agency (PICA).

They were presented with their certificates and other documents during PICA’s fourth swearing-in ceremony for candidates on Thursday.

PICA’s Chief Executive Officer, Andrew Wynter, said the ceremony “brings to life” the National Motto – ‘Out of Many, One People’ – adding that “as of today, you [new citizens] will enjoy the rights and privileges of born Jamaicans”.

In her remarks, PICA’s Director of Citizenship, Carol Saunders Hammond, who presided over the swearing-in exercise, noted that many of the applications received for citizenship are generally from persons of Jamaican heritage living overseas, who are able to apply locally or from the diaspora.

“We are hoping to make the service more accessible to the diaspora soon, as many persons by descent desire to connect with Jamaica and their roots and contribute to the development of Jamaica. This is good, as we recognise the importance of our total contribution, wherever in the world you are, as a Jamaican,” she said.

For his part, newly minted citizen, Jerry Bayeshea, who originates from Nigeria and who responded on behalf of the recipients, expressed gratitude to the authorities for considering and facilitating their applications.