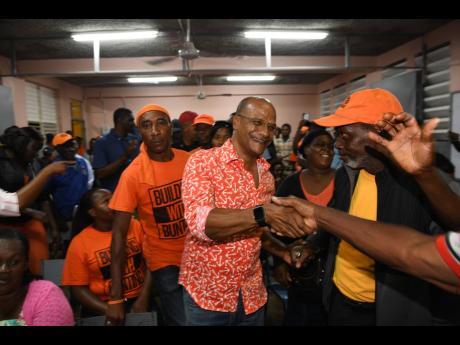 Ricardo Makyn
Central Manchester Member of Parliament Peter Bunting (centre) is greeted by supporters in the Knockpatrick division as he arrives at May Day High School earlier this month. Bunting will challenge Dr Peter Phillips for the leadership of the People’s National Party. Ricardo Makyn/Chief Photo Editor

Peter Bunting entered Parliament after winning the South Eastern Clarendon seat for the People’s National Party (PNP) in the 1993 general election. He was not named to the Cabinet, as he expected, and chose not to continue in representational politics.

He had little political capital when he returned to representational politics in 2007 to contest the Central Manchester seat, and it was the support of outgoing member of parliament, John Junor, elder statesman K.D. Knight and Mayor Brenda Ramsay that ensured his success. When he sought the position of general secretary in 2008, it was the support of Peter Phillips that was the critical factor in his victory. Not surprisingly, in 2017 when Bunting offered himself as a candidate for the presidency of the party without the support of any of established party leaders, he dropped out of the race before the election. Now, two years later, Bunting has re-emerged to challenge for the leadership of the party.

This time around, Bunting’s leadership challenge is supported by an elaborate public relations machine which replicates that of Prime Minister Andrew Holness. A united PNP could have dealt with the Jamaica Labour Party’s (JLP) multimedia campaign to undermine the leadership capacity of Peter Phillips, particularly in a situation where Holness, the youngest prime minister, is now leading us on the road to anarchy. What is most debilitating to the PNP and a major contributing factor to the JLP’s standing in the polls is the insidious anti-Phillips campaign being waged from inside the party by the Bunting team.

The PNP will only succeed in the ongoing communications battle when the entire party becomes engaged.

The party cannot assume that Jamaicans will remember Phillips as the minister of health who refurbished the island’s hospitals and established the Drugs for the Elderly programme; or that commuters in the capital city will contrast the present ‘ramshakle’ public transport system with the Jamaica Urban Transit Company that Philips established as minister of transport and works. As crime spreads islandwide, the PNP should be reminding the electorate of the courage and determination Phillips displayed as minister of national security in dismantling major criminal gang networks. Finally, as the JLP fails to realise its growth targets, the PNP must keep the success of the party’s Economic Recovery Programme (2012-2016) alive. This was Phillips’ landmark achievement which brought Jamaica from the brink of bankruptcy and left a platform for growth and stability.

Peter Phillips as president of the PNP

Those intent on undermining the performance of Phillips as president of the PNP use the 2016 general election as the basis for their assessment. They conveniently forget that Phillips did not take over the party until after the 2016 local government elections in which the PNP recorded its worst performance, except for the debacle of 1981. In 2012 the PNP was victorious in all 14 local authorities. In 2016 the PNP only managed to retain a majority in three authorities as its seat tally dropped from 150 to 96. In North West St Ann, all four divisions that had been won by the PNP in 2012 went to the JLP in 2016. Against this background we can all better appreciate that the performances of Shane Alexis and Damion Crawford in the two by-elections indicated progress.

So far, Phillips has launched a major initiative to provide the policy framework for the transformation of Jamaica’s economy and society when the PNP forms the next government. He has also recruited a team of candidates with the capacity, youth and experience to win the next general elections, and under his leadership the PNP has never been more effective in the parliamentary committees

Bunting and the PNP

As shadow minister for the portfolio of industry, investment and competitiveness, Bunting has been remarkably silent. One would have expected him to be far more assertive in promoting the PNP’s policy of expanding ownership and entrepreneurship at the base of the society. Instead, he only speaks opportunistically on the subjects outside his portfolio assignment that bring him publicity. During the by-elections in Eastern Portland, while Comrades at all levels were making their contribution to that campaign, Bunting’s team was handing out his T-shirts and his publicity material.

Bunting’s platform boast of his financial contributions to the party confirms his ignorance of the traditions of the party that he wants to lead. Norman Manley set the example of sacrifice for the party and had his house auctioned in the process. Comrades from all walks of life have made sacrifices for the party, a tradition in which Comrades take pride. Bunting is the first to make political capital from his contribution.

In making this challenge for leadership at this time, Bunting has shown scant respect for the established party protocol, which gives every elected president of the party the opportunity to lead the party in a general election. He has also made clear his indifference to the damage that a drawn-out leadership challenge would bring to the party, as well as the opportunity it would provide for Holness to call early elections, with the certainty that the Jamaican electorate has never voted for a divided party.

This indifference to the traditions and interests of the party could have consequences. The Constitution confers to the elected members of the majority party the right to recommend one of their number to the governor general for the position of prime minister, and it is a party protocol that makes the party president the automatic nominee for prime minister.

The role of the minister of finance

Arnold Bertram is a historian and former minister of government. You may send comments to columns@gleanerjm.com and redev.atb@gmail.com.