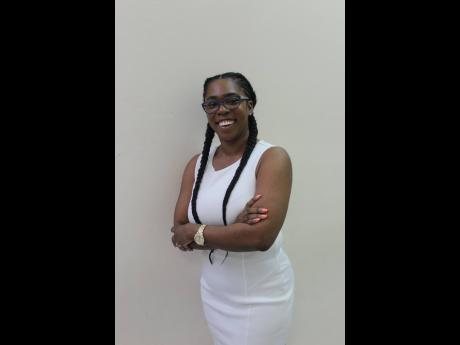 Fate is an idea that many believe in, while others say that each person controls his own destiny. Is it just coincidence if the very thing you were running from catches up to you, or is it fate? Monique Pryce is finding out that being fated to fulfil a purpose does not always happen in the most obvious way.

Pryce said there was almost a need within her to become a teacher, though her path steered her in another direction.

“There was a real passion for teaching. It is as if everybody in my community knew that I wanted to become a teacher because all my life, a shopkeeper called me ‘Teach’,” she said.

According to her, this passion for teaching stemmed from the incredible teachers she came across during her primary-school years.

“My love for teaching came from the several wonderful teachers I had in primary school. They had a special love for their students, and I wanted to carry on what I got from them,” she explained.

However, one simple decision seemingly changed Pryce’s fate, and she took a detour into the realm of media and communication.

“I did not want to go to sixth form after completing high school, and at the time, Northern Caribbean University (NCU) was accepting students without having gone to sixth form, so I looked at what they had to offer and chose mass communication with an emphasis on radio,” she said.

Pryce explained that while she excelled throughout primary school and considered high school the period in which she tried to find her purpose, she struggled a bit during the first of her tertiary years.

“I did not handle transitions well, and being away from home (Portland) did not make it any easier, so I did not do as well as I would have hoped in that first year, but as soon as I was settled and focused, I just took off,” she said.

Pryce explained that she made the honour roll while at NCU and did her best, which landed her an internship at one of Jamaica’s popular radio stations following the completion of her degree.

“I enjoyed my internship and learnt a lot while I was there,” Pryce said. “After my internship, I was taken on full-time at the radio station, where I worked in different departments, honing my craft in media,” she continued.

The self-described introvert said that while she enjoyed her job, there were times when the news got a little overwhelming. Coupled with that, she realised that she was not in love with journalism.

“I was overwhelmed sometimes. That, coupled with my need for more, caused me to leave the radio station and move into my current position at the Ministry of Education,” she said.

Pryce is communications manager of the Early Childhood Commission, an arm of the Ministry of Education, where she is in charge of communication distribution internally and externally and is the liaison between the media and the commission.

She agreed that fate has won as she still has a hand in what happens to children, especially those of the early-childhood cohort.

“I am working and speaking on behalf of the children,” she said, “When we go into the meeting rooms, we are making decisions to ensure that each child who enters an early-childhood institution is getting the best possible start to their academic life.”

At 26 years old, Pryce is proud of where she is in life, but she plans to complete a Master of Arts degree in communication as soon as possible and, hopefully sometime soon, achieve her dream of voicing commercials.

As someone who does not always plan her next move, Pryce cannot wait to see where life and fate take her. She is not worried, however, as she believes that dedication is the answer to many questions throughout life’s challenging moments.