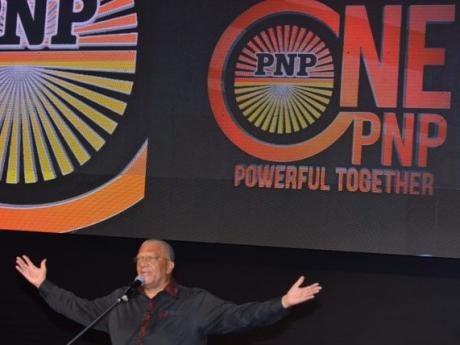 Dr Peter Phillips launches his 'One PNP, Powerful together' campaign at the Courtleigh Auditorium in New Kingston - Kenyon Hemans photo

It was like a counteraction of sorts: incumbent People’s National Party (PNP) president Peter David Phillips entering the stage the Courtleigh Auditorium in New Kingston on Thursday night to the tune of Sizzla’s ‘Solid as a rock’.

Just over two weeks ago, his impending challenger, Peter Murcott Bunting turned up at the May Day High School in Manchester to the beat of Chronixx’s ‘Here comes trouble’.

Bunting had just announced that he would be going up against Phillips for the presidency of the 81-year-old party at the upcoming annual conference.

But on Thursday night, Opposition Senator Donna Scott Mottley emphatically declared: “There is only one Peter and that is the 'First Peter'.”

She was among a series of senators and other politicians who would take to the stage to endorse Phillips’ candidacy.

K.D. Knight was a part of the pack.

Opposition Senator KD Knight says @DrPeterPhillips deserves to be the president of @JamaicaPNP and the next prime minister of Jamaica, as he endorses the presidential campaign. pic.twitter.com/tEAbXkSpe8

"I want a man with an iron-clad integrity. That’s Peter Phillips!" said Knight, adding that this was more than just a leadership election, it was a campaign for Jamaica House.

Young senator Damion Crawford would echo the sentiments when he emerged from backstage to introduce Phillips.

.@JamaicaPNP vice-president @DamionCrawford leads incumbent @DrPeterPhillips onto the stage to launch his presidential campaign. "My mission is to bring the youth, push dem forward and mek dem tek control of the future," Phillips said. pic.twitter.com/TQpogPkVMN

"I am here with the Peter that never left this party even when he was sad about what happened to him," said Crawford.

Phillips later told Comrades it was the "same Peter" with a record of achievements in Government who was seeking their support to remain at the helm of the PNP.

"We can win and we will win," he proclaimed, in earshot of his four vice-presidents – Crawford, Mikael Phillips, Wykeham McNeill and Phillip Paulwell.

Phillips also sought to dismiss claims that he has not been doing much in the two years he has been party president.

"Popularity comes and popularity goes, but leadership is more enduring," he said. "It is not pretty picture organise this thing. It’s work on the ground."

The incumbent president said he has been connecting with the base in constituencies and engaging young people to create a mix of youth and experience in the PNP. He also said he had been filling vacant seats without the rancour that had dogged the party in recent times.

Then, he ripped into the government’s performance, saying it has been failing on several fronts, and health was among the most critical.

Phillips: If you want to see the team do better, there is space for everyone to work. We can win and we will win. He said, it was the "same Peter" who led successes as a Government minister who was seeking re-election as @JamaicaPNP president. pic.twitter.com/87YlNyCnL9

“If you go to a hospital, carry a rat trap,” said Phillips, referring to recent reports of rat infestation at a ward at the Spanish Town Hospital in St Catherine.

The ward was later ordered closed for a rodent eradication programme.

"What further unites us is the urgent need to get rid of this corrupt and uncaring Jamaica Labour and only one PNP can,” said Phillips.

2. To end squatting in Jamaica once and for all

3. To take up the fight for contract workers.
“Until we begin to close the gap between those who benefit from an excess of privileges and those who eke out a living on the margins, Jamaica will have no peace.”

Peter’s general election strategy:
To retain the 29 seats now held by the People’s National Party in Parliament and win an additional 10 in the next election.

.@JamaicaPNP vice president @DamionCrawford introduces @DrPeterPhillips as the only leader of the party as Phillips launches his leadership campaign. pic.twitter.com/XQQl7xYqUC

- Dwayne Vaz, Westmoreland Central:
If you look on the team, you see young, bright Comrades. Everywhere I go, I say one Peter. With Comrade Peter Phillips as leader, anytime this cass-cass done on September 7, it’s a national campaign.

- Wykeham McNeill, MP Western Westmoreland:
What we are selecting now is not just a leader of a party but a movement. I hear people saying the PNP cant win, Dr Peter Phillips can't win. That doesn’t sound like PNP talk. We have to understand that we don’t only can win, we will win.

- Phillip Paulwell, Kingston eastern and Port Royal:
I believe in loyalty to our party. We call him ‘Mr Fix It’ and having served with him for 13 years I can call him Mr Fix It.

Shane Alexis, candidate St Mary South Eastern
Dr Phillips’ track record is beyond question but most important is his teachings. Don’t be fooled that this is just a presidential campaign. This is a campaign straight to Jamaica House. When we done with this campaign a di Labourite them next.

.@veneshatweets, the @JamaicaPNP St Andrew Eastern candidate declares support for @DrPeterPhillips and promises a September to remember. Phillips will face off with @PeterBuntingMP in a presidential election slated for September 7. pic.twitter.com/9nmRxMIeAV

Veneisha Phillips, candidate St Andrew Eastern
Peter David Phillips is the man for the job. He is tried, he is tested, he is proven and when September comes it will definitely be a September to remember because after that it is time for us to say to the Jamaica Labour Party, pack your backs and go!