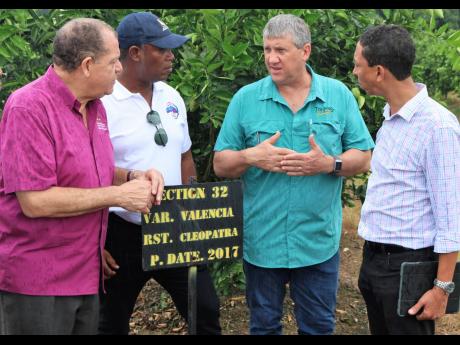 The citrus greening disease (huanglongbing), which since 2010 has drastically impacted their groves and production, has forced Trade Winds Citrus Limited in St Catherine to diversify its operations to include coconut and pineapple, Managing Director Peter McConnell divulged on Wednesday.

Over the past four years, some 854 acres of citrus have been taken out of production and replaced with pineapples and coconuts on three farms, bringing the total area to 1,547 acres, with 1,385 acres in citrus, 88 acres of planted coconut and 74 acres currently allotted for production of the MD2 pineapple variety, with the first harvesting projected for February 2020.

Despite the challenges, Trade Winds Citrus says it remains true to its core business and that since August 2018, it has invested in a 9072-square foot citrus nursery, with the first set of seeds sown in December 2018, from which the first 6,000 seedlings are scheduled for release in August 2020. At maximum capacity, the nursery can produce 30,000 seedlings annually

“This farm was traditionally 650 acres of citrus, but because of the greening disease, we have bulldozed quite a bit of it,” McConnell disclosed during a tour of the New Works property, where 75 acres have been allocated for pineapple cultivation.

However, he pointed out, it hasn’t all been smooth sailing.

In addition to having to acquire more equipment, the weather has been a headache.

“We would start preparation, order the seedlings and then down would come the rain and we have to move to another piece of land that is more freely draining than the next plot.”

Despite these challenges, the company has continued to expand and, over the last four years, has invested more than $1 billion installing its Tetra Pak lines capable of filling, 200ml, 500ml and one-litre cartons using the cupboard-friendly technology.