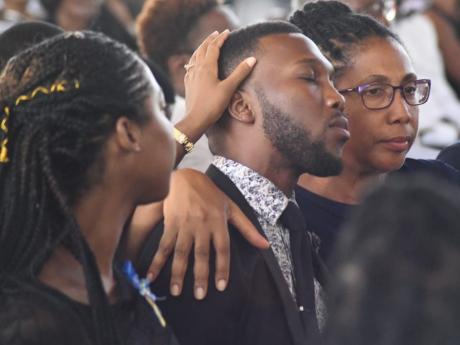 Theo Henry, son of Martin Henry is consoled by his mother Jackie, during the funeral at the Kencot Seventh-day Adventist Church.

There were many tributes - 17 of them - and most would exceed the four-minute countdown mounted on a digital clock in an aisle of the Kencot Seventh-day Adventist Church in St Andrew on Sunday for the funeral of Gleaner columnist and university administrator Martin Henry.

Five of the tributes were musical.

Henry, who was 61, died suddenly on May 28, moments after appearing live on Television Jamaica to eulogise former Prime Minister Edward Seaga.

At the Kencot church, hundreds of mourners heard stories over and over about a man described as an intellect, a stickler for time and an advocate for justice and fairness.

But when his brother, Dr Eric Henry, took to the podium, he declared that he would not repeat what had already been said or what was likely to be said by others.

Dr Eric Henry, says his brother, @JamaicaGleaner columnist and @UTechJamaica administrator Martin Henry was a reliable intellect on whom he could depend. pic.twitter.com/vp8VW6lcsL

He then retold the story of his brother's birth.

"He came to us when his mother was 48 years old and his daddy was 56 years old. Many would say, 'a ole people pickney, what else him can do?' But from the day of his birth, he was mature," said Dr Henry, who was 21 years Martin's senior.

Dr Henry said Martin was an invaluable person on whom he could depend for advice and help in his academic pursuits.

Meanwhile, to celebrate Martin's contributions and service to education and public service, three initiatives were announced:

1. The family has established at the Jamaica Money Market Brokers, the Martin Henry Academic Scholarship Fund for needy students. The acccount number is: 1347319.
2. The National Integrity Action of which Henry was a director is in discussions with the Press Association of Jamaica to identify a way to acknowledge the upholding of good governance.
3. The University of Technology will establish the Martin Henry Award for best research.

There was a mix of moods as Theo and Lawrie Henry eulogised their father #MartinHenry. They revealed that five months before his passing, Henry had written several pages of an autobiography he had emailed to them to be uploaded to the internet for editing - Rudolph Brown photos. pic.twitter.com/WGZvKPVgDq

He was the best dad

Theo and Lawrie, the children of Gleaner Columnist and university administrator Martin Henry, held rapt attention as they eulogised their father on Sunday.

And according to Lawrie, it was an easy task.

Five months before his passing, Henry had documented an autobiography and emailed them to be uploaded online for editing.

"It was now for us to decide what to leave out," Lawrie said.

She and her brother would recount the life of their father in the church, community, academia and importantly, family.

"He ensured that myself and my brother received a solid education. He taught us to think," said Lawrie.

The children would review the Henry era over the 61 years of his life.

Chief Executive Officer of the RJRGLEANER Communications Group Gary Allen says there was no office or institution that did not come up for research or criticism by Martin Henry. Henry wrote for The Gleaner and also appeared on radio and television to offer public commentary. pic.twitter.com/zUpftDZH2f


"It was a life well lived, a life of meaning and purpose," said Theo.

He said his father loved research, and penned his findings in journals, papers and The Gleaner.

In fact, Henry was The Gleaner's longest serving columnist, writing for the newspaper for 31 years.

He was married to Jacqueline for 34 years.

Pall-bearers guide the coffin on the bier towards the exit of the Kencot Seventh-day Adventist Church in St Andrew as the four-hour funeral of Gleaner columnist #MartinHenry comes to close. He will be interred in Ramble, St Thomas in the parish of his birth - @DamionMitch video. pic.twitter.com/P9VSmjHbzy