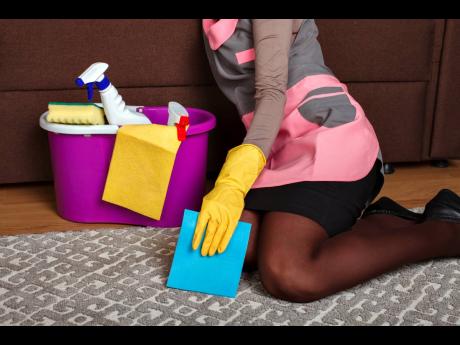 Domestic workers have sacrificed, not for themselves, but for their loved ones.

Far Rockaway Church of Christ in Queens, New York, hailed domestic workers as an integral part of the black narrative, a narrative that is often ignored. Happy Endings , the church-sponsored play directed by Chris Spears and written by Thomas Douglas Ward, challenged the portrayal of domestics as quislings, reactionaries, and disloyal to the black collective.

In this emotive presentation, domestics are very much part of the resistance, although their approach is markedly taciturn and subtle. Theirs is a revolution nurtured by their maternal, feminine wisdom, and energy. They are selfless, protective of their children, their lineage and, by extension, the black race.

We cringe at scenes of their lamenting over the divorce of the Harrisons, their employer. They wail, stomp, and beat their chest, evoking stereotypical images of plantation life and the role of house slaves. They are consummately empathetic, feeling and expressing their employers’ every sentiment.

They cry and wail on word that their termination is likely as the marriage of the Harrisons flounders. They recall imploring and cajoling them to mend their union, mindful of the dire consequences.

“I begged them. We should have plopped down on our knees. Please, don’t do this. Don’t victimise the babies.” Their recount is laced with less-than-flattering and tongue-in-cheek descriptions of Mr Harrison’s philandering. But this is no time for levity.

With their livelihood and pension at stake, they fold, unable to contain their apprehension for the future.

“Mr Harrison had promised to take care of me for the rest of my life. I need my pension.”

The women replay the quotidian indignities that domestic workers face.

“We iron and wash. We are never trusted. They check our pockets and even count the sugar cubes.”

Amid this emotional tsunami, their nephew appears. Sartorially dressed and contemporary, he represents another side of the black experience – one that is disconnected and not fully appreciative of the sacrifice that defines the past. He is befuddled by his aunts’ reaction and raises the subject of pride, race, and identity. He recoils at the scene, questioning his aunts’ sense of history.

“You are crying because of Massa’s problems?”

His interjection is rebuffed, one aunt challenging his self-absorption and naivety.

The stage is now set for a battle of ideas and the need to revisit history through the lens of these actors.

“Is it not human to have feelings for your bosses’ sorrows?” one aunt quips.

“For my worries – no charge; for my advice, your clothes and your college – no charge. When was the last time you paid for food, for rent … .”

Her words pierce the young man’s bravado. He now understands that he, too, will be impacted by the Harrisons’ decision. He realises that his aunts’ tears are for their daunting future and not their employers’ predicament.

It is his eureka moment.

He concedes, “I am indebted to you.”

The lamentations are contagious. Mass hysteria leaves us guessing the denouement of this highly charged play.

The more the domestics explain their position is the more we recoil if we had ever used derogatory words to describe them and their work. Ward’s message is poignant and unwavering: domestic workers are invaluable, and we owe them everything.

Their refrain: “We must stick around for what we are owed,” is as combative as it gets.

Providence, though, smiles on the weary, and fear and uncertainty are replaced by hope and assurance. News travels quickly. The Harrisons reverse their decision to part ways. This means that years of toiling as domestics will not come to naught, and in a few years, they will reap their reward. There is unbridled jubilation as the women assert their importance to their families and all of society.

Domestics have sacrificed, not for themselves, but for their loved ones. Resistance comes in diverse ways. Activism can be quiet but equally efficacious. Domestic workers have proven that much.

Quietly, they have shaped the black narrative in a way we are yet to fully understand. With a handful of able actors, Ward captures this enduring truth in Happy Endings.

- Dr Glenville Ashby is the award-winning author of ‘Anam Cara: Your Soul Friend and Bridge to Enlightenment and Creativity’. Email feedback to columns@gleanerjm.com and glenvilleashby@gmail.com, or tweet @glenvilleashby.