Art as education at PAMM 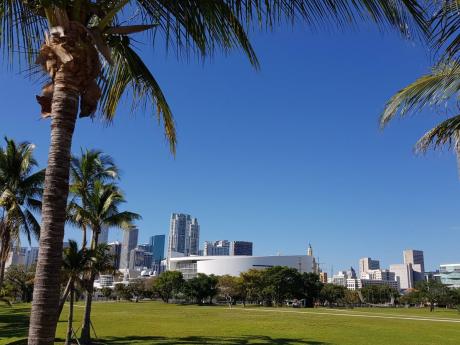 Laura Tanna
Museum Park view from PAMM, looking across to Philip and Patricia Frost Museum of Science on the far left.

How downtown Miami has changed since 1984 when the Center for the Fine Arts was created on Flagler Street with no art of its own! To be honest, I always found the traffic and congestion of downtown intimidating and rarely visited the centre for its travelling shows, not even after it started accumulating its own collection from 1996. But now a visit to its new home, the Pérez Art Museum of Miami (PAMM), at 1103 Biscayne Boulevard, is a delight! You can take rapid transit and stop at the Museum Park Metro mover station or drive right into the museum’s parking garage, a bit costly but discounted for members.

PAMM offers free tours. I took one on the museum’s fascinating architecture. The Swiss team of Herzog and de Meuron studied Miami for months before interweaving into the final design Stiltsville – those houses built on stilts in Biscayne Bay made infamous during prohibition – and the greenery of the Everglades. Hanging gardens designed by Frenchman Patrick Blanc contribute to the museum’s cooling system, cork seats in the auditorium reduce noise and maintenance, floor-to-ceiling plate glass, specially fabricated to withstand hurricane-force winds allows views of the beautiful blue bay – all of which make PAMM special.

PAMM’s chief curator, European American Tobias Ostrander, born in Boston, was actually recruited in 2011 before the move to the new building site because of his years of experience with Latin American art. As a museum educator at El Museo Del Barrio in Brooklyn, and with a masters degree in curatorial studies and art in contemporary culture from Bard, he worked on the biennial in São Paolo, Brazil, for five and a half months and was tempted to remain in Brazil. Instead, he was lured to San Diego to be associate curator of inSITE, on the border with Tijuana, Mexico, a binational art project. Eight years in Mexico City at Museo Tamayo Arte Contemporáneo followed. He spent another two years as director of El Museo Experimental del Eco, part of the national university in Mexico City. His innovation of combining the work of local artists with international ones helped cement his credentials.

PAMM’s Latin American patron, after whom the museum is named, Jorge M. Pérez, was born in Buenos Aries, Argentina, of Cuban heritage but spent much of his youth in Colombia before coming to Miami in 1968. He graduated summa cum laude in economics from Long Island University and continued his studies in economics at the University of California, Berkeley, where he immersed himself in progressive campus politics. But captivated by the architecture of London and Paris during European travels after graduation, Pérez moved to Ann Arbor and obtained a masters degree in urban planning at the University of Michigan. Returning to Miami, he worked first in Miami’s Planning Department on community land use and development. Then, Pérez went on to become a billionaire real estate tycoon, but the hard work took its toll.

His first marriage produced three children – sons Jon Paul and Nicolas, and daughter Christina – all involved with PAMM in different ways. But the marriage ended in 1995. A second marriage to Darlene Boytell has given him a partner in his enthusiastic art collecting and a third son, Felipe. Pérez credits his own mother, whom he calls an intellectual, with inspiring his love of art as a result of her taking him to museums when he was young, as well as his reading many art books while in school.

Studies support the importance of introducing children to art and museums from an early age. Chief Curator Ostrander notes:

“I’m part of a large team. We are four curators, a curatorial assistant and we have an incredible endowment from the Knight Foundation for school programmes, given before we opened this building, a $10-million endowment to service every third-grader in Miami Dade County.

“About 27,000 schoolchildren come through every year. They specified third grade because it’s a really important learning period. A lot of studies say that if children come to museums at that time, then they’re more likely to come back later in life. So, we’re always very active, but we have other types of programming, including a music programme. We’re revamping Currents, an evening where there’s live music, bands and interactions going on throughout the building. We’ve done more performance things and a teen programme called PTAC, which is very dynamic.

“Students do a lot of interpretive programming, videos, blogging about the artworks and really critique what we’re doing from a youth perspective, which is amazing. We have a great, growing, really strong membership. I see particularly the seniors taking advantage of the membership programming, because a great new membership director has made special programmes just for members, more intimate conversations, and it’s been really well received.”

The man, Jorge M. Pérez, has put his wealth into his passion for art and educating others into the joy of art. He signed The Giving Pledge to donate at least half of his wealth, valued at US$2.6 billion in 2018, for philanthropic causes, of which PAMM is but one. His US$40 million in financial and artwork donations made PAMM a place you definitely want to visit, especially because on July 18, ‘The Other Side of Now: Foresight in Contemporary Caribbean Art’ opens, showcasing the work of 12 contemporary Caribbean artists from six islands and the diaspora. You won’t want to miss it.