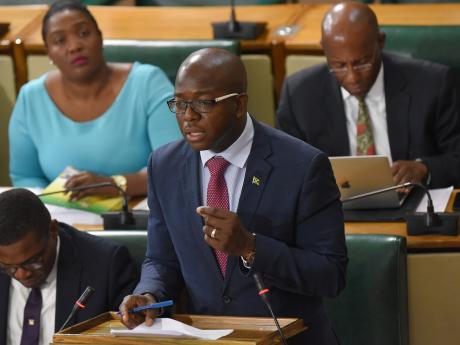 Minister without Portfolio in the Ministry of Economic Growth and Job Creation, Senator Pearnel Charles Jr., opening the debate on the Petroleum (Amendment) Act, 2019 in the Senate on June 28, 2019 - Contributed photo.

The debate on the Petroleum (Amendment) Act, 2019, which opened in the Senate during Friday’s sitting at Gordon House, has been deferred for completion at a later date.

It seeks to, among other things, transfer the rights and obligations of the PetroCaribe Development Fund (PDF) to the Government of Jamaica.

Minister without Portfolio in the Ministry of Economic Growth and Job Creation, Senator Pearnel Charles Jr., who piloted the proposed legislation, said it also seeks to integrate the PDF’s functions into the Ministry of Finance and the Public Service, by repealing Part IIIA of the Petroleum Act.

In outlining details on the Fund, Charles Jr. explained that it was established as a body corporate by the Government, pursuant to an amendment to the Petroleum Act in 2006.

Under Part IIIA of the Petroleum Act, the Fund was charged with the responsibility of managing, among other things, the proceeds which accrued to Jamaica under the Energy Co-operation Agreement entered into between the Governments of Jamaica and the Bolivarian Republic of Venezuela.

He said the PDF’s functions also included receiving loan repayments from borrowers from the Fund; receiving other proceeds which might accrue from the Fund’s investments; financing projects and programmes; and settling Jamaica’s debt service obligations for the purchase of oil and petroleum products under the PetroCaribe Agreement or any other bi-lateral arrangements between Jamaica and Venezuela.

He added that in this regard, “the PetroCaribe Fund has fulfilled its mandate”.

He said sub-clause (1) of clause 4 specifies that any moneys held in any bank account in the name of, or standing credit of, the PetroCaribe Fund shall be credited to the Consolidated Fund.

“Any moneys paid into the Consolidated Fund on behalf of the PetroCaribe Fund must be used in the payment of any existing liabilities of the Fund,” he said.

He further stated that sub-clause (2) sets out that all moneys which became payable to the PetroCaribe Fund are to be paid into the Consolidated Fund.

“This refers to the moneys which became payable to the Fund before or after the Act becomes operational,” he said.

He said sub-clause (b), (c) and (d) of clause 6 addresses the issues regarding the existing liabilities of the PetroCaribe Fund, which will become the responsibility of the Crown.

The Minister added that this clause also addresses the issue of any proceedings and remedy brought before or continued by or against the PetroCaribe Fund which may be brought or continued against the Attorney General.

“It is also to be noted that all records and data of the PetroCaribe Fund will pass to the Minister with responsibility for Finance on behalf of the Crown,” he said.

He said clause 8 relates to savings pertaining to, among other things, any existing contractual obligations, rights, assets and liability of the PetroCaribe Fund.

Senator Charles advised that with the integration of the Fund’s functions into the Finance Ministry, the Government would have continued its objective of merging, closing and divesting public bodies under the public sector rationalisation programme.