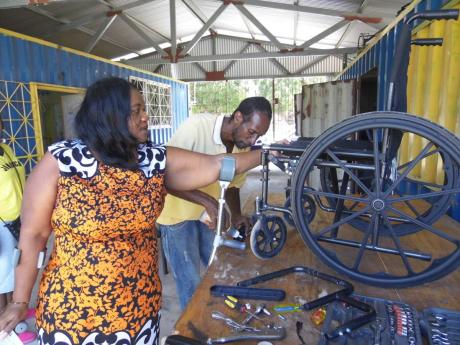 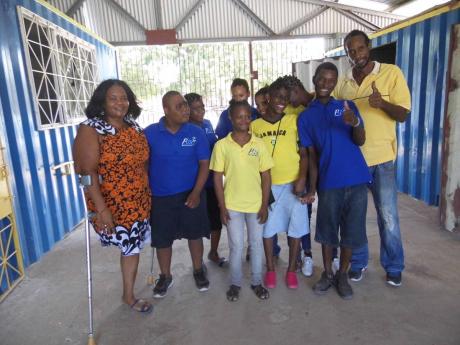 Contributed
Bridgette Johnson along with persons who are learning a skill at the Portmore Self-Help Disability Organisation Mobility Resource Centre.
1
2

Having a leg amputated after being mowed down by a speeding motorist was bad enough for Bridgette Johnson. What she was not prepared for were the adjustments she had to make to her life; and being teased by children living in her East Kingston community.

Bridgette was a student at Norman Gardens Primary School when the tragedy occurred one weekend while walking home from a nearby beach.

“I wanted to die. I couldn’t accept losing my leg. I didn’t want to go anywhere. I felt helpless and depressed,” she recounted.

Consequently, becoming a resident at the Sir John Golding Rehabilitation Centre was a great relief for her, as it provided an escape from her community, where she felt she could no longer fit in.

“It was the best thing that happened to me, because the Rehab Centre gave me a new lease on life. It was a place where I could cope and learn to accept myself,” she related.

However, while she was grateful for her new environment, being away from her family was disheartening for her.

“I know that it was hard for my family to deal with my situation,” Bridgette, who grew up in a ­single-parent household, said.

Bridgette excelled academically at the Hope Valley Experimental School, where she passed the Common Entrance Examination for Westwood High, a boarding school in Trelawny. By second form, she returned to the Sir John Golding Rehabilitation Centre to facilitate further therapy to her leg, following additional surgery. During that period, she attended Papine High School.

“I was searching for love. I wanted to be loved,” she explained.

Determined to put her past behind her and make the best of her life, Bridgette enrolled in three evening classes; and, over time, she earned seven subject passes at the Caribbean Secondary Education Certificate level.

Fast-forward to 2019, her name has become synonymous with championing the cause of persons with disabilities through her founding of the Portmore Self-Help Disability Organisation (PSDO) Mobility Resource Centre, located in Watson Grove, Gregory Park.

Through the work of the PSDO, scores of persons with mental and physical challenges are able to access skills training to make jewellery, soaps, slippers, and bags, as well as repairing wheelchairs, crutches, walkers, and canes.

With support from the JN Foundation through its Social Enterprise Boost Initiative project, in concert with United States Agency for International Development, the centre benefited from business management, skills marketing and exposure. Today, more than 300 persons are registered with the centre.

Behind the genesis of this vibrant social enterprise is a very sad story. It happened in 1994; however, the memory of the experience continues to replay in Bridgette’s mind. She was walking with a crutch on a foot bridge in the Greater Portmore community, when her leg collapsed beneath her and became fastened in an opening in the bridge.

“I shouted for help, but no one was around,” she said.

It was just about dusk and rain was about to fall. She was, therefore, relieved when she saw a man approaching her; however, instead of helping, he tried to rape her while her leg was still fastened in the bridge. Unsuccessful in his attempt, he fled with her belongings.

Her first advocacy engagement was with the National Housing Trust to have the houses allocated to the physically challenged, in subsequent housing developments in Portmore, to be more accessible. And, following recommendations from the Government, she extended her advocacy reach to include all persons with physical challenges in Portmore.

Bridgette, who at the time, was working as a receptionist and telephone operator at The Gleaner Company, further bolstered her advocacy by starting a newspaper column called Differently Abled. Wanting to fulfil her desire to do more for persons with disabilities, she accepted voluntary redundancy so that she could give full attention to the social enterprise she had established.

Her work with this venture has not been an easy road for her.

“In 2008, I was held up and robbed by two gunmen at the office. The gun clicked, but it never went off,” she related.

However, despite that ordeal as well as the financial and other challenges which she faces, she is committed to continue to give her full attention to what matters to her most.

“I want to devote myself to helping others. Someone gave me the opportunity, so I want to give others an opportunity, too. I just want to make a difference in the lives of others,” Bridgette affirmed.