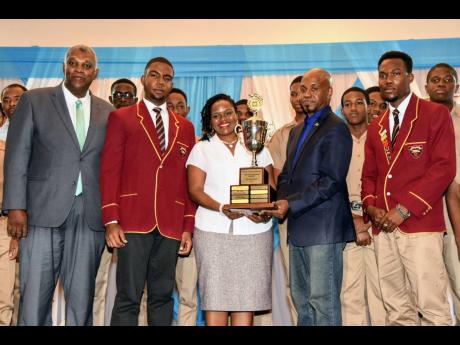 Over $3 million in cash and prizes was awarded to the top performers in the 2019 Petroleum Corporation of Jamaica (PCJ) Schools Energy Programme Competition.

Approximately 90 students, ages six to 19, from primary and high schools islandwide participated in this year’s renewal, which was held under the theme ‘Using Natural Resources to Generate Renewable Energy at Your School’.

The students were asked to, among other things, build a solar cooker that utilises sunlight for energy.

The competition culminated with an awards ceremony at The Jamaica Pegasus hotel in New Kingston last Friday, which saw students of Cornwall College in Montego Bay, St James, topping the entrants.

They landed the coveted $500,000 project implementation grant and won prizes in the science, essay, jingle, and poster competitions.

Cornwall College will also receive technical support from the PCJ to execute an energy efficiency and conservation project at the school.

The Schools Energy Programme seeks to heighten youth awareness about energy issues by, among other things, exposing them to energy-efficient products, technologies, and practices.

It also gives students a first-hand look at traditional and renewable energy technologies and introduces them to courses of study and careers in the industry for exploration and pursuit.

The programme has, in this regard, engaged more than 2,000 students from 120 schools islandwide through tours and seminars during the 2018-19 academic year.

Science, Energy, and Technology Minister Fayval Williams, who spoke at the event, praised the students for their innovations.

“I have seen all the entries and I was very impressed. I saw a lot of enthusiasm. I want to commend you all for participating. You are learning skills in an industry that is expanding globally and locally,” she pointed out.

Noting that a significant percentage of Jamaica’s energy is currently derived from renewable sources, Williams said that based on the country’s generating capacity, an estimated 18 per cent of the output would be supplied through renewables by as early as 2020.

Consequently, she encouraged the students to pursue careers and interests in this growing industry, pointing out that “the technology is changing and it is being adopted globally”.

The minister also commended PCJ for initiating the Schools Energy Programme and encouraged them to continue fostering innovation and educating young people about the opportunities in the sector.

Meanwhile, PCJ’s Acting Group General Manager, Brian Richardson, who also spoke at the ceremony, said that the initiative is growing, noting that the number of participating students increased from 2,220 in 2017-18 to 2,284 this year.