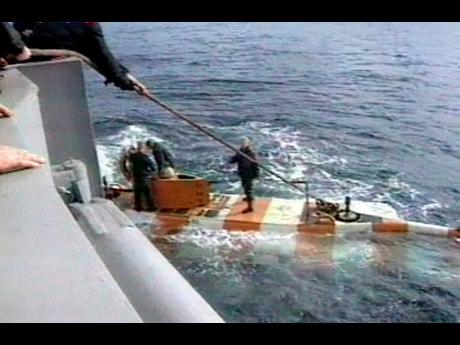 The Associated Press
In this video grab provided by the RU-RTR Russian television via APTN , Russia rescue personnel return from a dive in a mini submarine to the Kursk on the sea bed in the Barents Sea, Russia. The Russian military says that a fire on one of its deep-sea submersibles has killed 14 sailors. The Defense Ministry says that the blaze erupted Monday while the vessel was performing tests in Russia's territorial waters. (RU-RTR Russian Television via AP)

A fire on one of the Russian navy’s deep-sea submersibles killed 14 sailors, the Russian defense ministry said yesterday without giving the cause of the blaze or saying if there were survivors.

The ministry didn’t name the vessel that caught fire Monday. Russian media reported that it was Russia’s most secret submarine, a nuclear-powered vessel designed for sensitive missions at great ocean depths.

The defense ministry said in a statement that the fire broke out while the submersible was measuring sea depths in Russia’s territorial waters and that the vessel was at the Arctic port of Severomorsk, the main base of Russia’s Northern Fleet, on Tuesday. An investigation was under way, it said.

The ministry said the fire was put out due to the self-sacrifice of crew members but didn’t say what is thought to have started it. It didn’t say how many people were on board the submersible or if there were sailors who survived the fire.

The ministry’s statement said the submersible is intended for studying the seabed but didn’t give its name or type. Russia’s RBC online news outlet reported it was the nuclear-powered AS-12 Losharik.

The Losharik, which entered service in 2010, is the most advanced and most obscure Russian submarine. It’s named after a Soviet-era cartoon character, a toy horse made of small spheres.