On mission for a better Jamaica – PM medal awardee 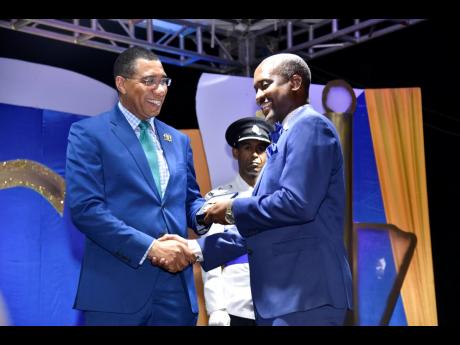 He is endeavouring to ensure that, through education and agriculture, Jamaica will be able to achieve developed country status within 11 years, and in the process become the place of choice to live, work, raise families and do business, as the plan’s mantra aptly articulates.

Hall, who is one of 40 recipients of the 2019 Prime Minister’s Medal of Appreciation for Education, has contributed more than 24 years to the Jamaican education system as a teacher, principal and administrator.

“I try, every day, to create a society in which I would want to retire, and I do that one child at a time, one parent at a time, and one teacher at a time,” he said.

Hall says that having come from humble beginnings, he too is an example that self-actualisation and fulfilment can be realised through education.

He remains grateful for the influence of his late grandmother, who was also an educator and who served as his primary guardian.

Hall says that agriculture has always been an area of ­interest for him, pointing out that in 2010, he introduced it to ­students at Spanish Town High and ­established a ­curriculum for the subject.

He believes that education is an ideal platform on which to strengthen the agricultural sector while enabling more persons to earn a living and contribute to national development.

“When I was working in rural Portland, I found that many of the students after grade 9 were given a plot of land to produce coffee. From seventh grade, during the reaping season, you would not necessarily see them (students) because coffee production at that time was really a cottage industry which families participated in,” the former principal shares.

He notes that the practice resulted in many of his students leaving school semi-literate and not being able to fully immerse themselves in the field of agriculture. This, he says, led him to organise and coordinate literacy programmes for school-dropout farmers in Portland’s coffee belt.

“While I was in Balcarres, through the Coffee Corporation we would do literacy sessions for coffee farmers and we would also infuse that with agricultural techniques.”

He explains how the infusion of literacy skills improved the agricultural practices of the farmers and gave rise to the implementation of new waste management farming techniques.

“We used recycled PET bottles to do underground irrigation. So we would partially plant the plastic bottle with holes beside the root of the coffee plant. The bottles would be filled with water and this would result in less evaporation of water from the plant while repurposing the empty bottles.”

He points out that his passion for education and agriculture also fuels his advocacy for safe ­environmental practices such as recycling and using eco-friendly material.