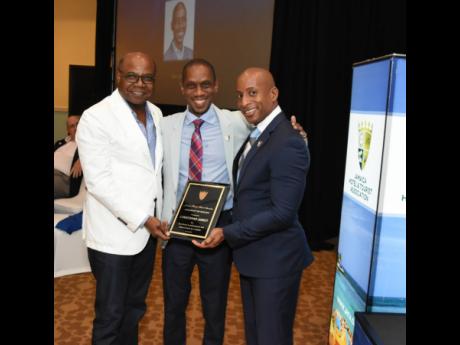 Managing Director and Chief Executive Officer of Altamont Hotels, Christopher Jarrett, has been named Hotelier of the Year by the Jamaica Hotel and Tourist Association (JHTA).

The hotelier, who has been instrumental in leading the updating, rebranding and expansion of the Altamont Hotels brand from its base in Kingston to include a property in Montego Bay, copped the award at the JHTA’s annual awards ceremony, held on Saturday, June 29, at Hilton Rose Hall Resort and Spa in Montego Bay.

In announcing the award, the JHTA noted that Jarrett oversaw the purchase, renovation, and development of Altamont West in Montego Bay with more rooms, conference facilities, and spa. This was accomplished after he reorganised the company, including appointing external directors, achieving greater efficiency while making the business’ risk profile more attractive to investors.

Under his leadership, the company has also improved its competitive advantage by investing in opportunities to compete in the Airbnb space.

In honouring the Altamont Hotels boss, the JHTA noted that when Jarrett started out in the field of hospitality as a food and beverage manager, he had no experience in that area, but was not deterred by that shortcoming.

He proceeded to qualify himself by participating in food and beverage seminars and achieving certification in food-safety standards. In its citation, the umbrella hospitality association pointed out that Jarrett had come to the industry with a master’s degree in business administration from Nova Southeastern University and a Bachelor of Technology Degree in Engineering Technology from the New York Institute of Technology. He is also a certified hospitality trainer and chef and a licensed lifeguard.

Jarrett has worked in the tourism industry in various capacities for over two decades and has held senior positions in several influential tourism and tourism-related organisations. He is co-chair of the annual Kingston City Run, an international marathon that had its seventh staging earlier this year.

The JHTA’s accolades of the Hotelier of the Year describe him as being “a stalwart supporter of all initiatives that serve to advance the cause of tourism and national development” and as “not only a consummate hotelier, but a passionate, committed and enterprising Jamaican”.

Jarrett has been hailed as “a true tourism stalwart” and “a hands-on leader” in the industry, being involved on a daily basis in work ranging from high-level strategic planning to performing aspects of bellhop duties.

Speaking about the upgrades to the Altamont properties under the direction and guidance of Christopher Jarrett, the JHTA said the Kingston hotel has undergone many improvements, including the addition of an elevator, making it the only small hotel in Kingston with that facility. To accommodate the disabled, wheelchair-accessible showers have been installed, and the hotel provides a medical and pension plan for employees at no cost to them.