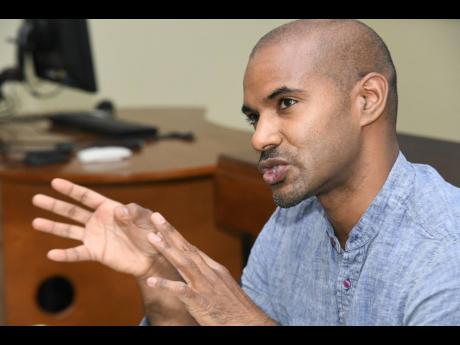 Rudolph Brown
Kris Manjapra, associate producer of history and chair of Department of Studies in Race Colonialism at the Centre for Reparation Research Special Seminar “Emancipation Process as Crimes Against Humanity” at the Neville Hall Lecture Theatre, N5 Faculty of Humanities and Education, UWI, recently.

Tufts University’s Professor Dr Kris K. Manjapra has argued that Britain has a big case to answer with regard to reparations for slavery in Jamaica.

His assertion comes amid increased calls for reparations in recent months against the background of the role Britain played in enslaving Africans in the West Indies and slavery’s lingering impact on Caribbean societies.

Manjapra, who chairs the Consortium of Studies in Race, Colonialism and Diaspora at the university and is an associate professor of history, said that it was imperative that Caribbean societies take a more strident stance in demanding reparation.

According to him, not only did the British pay slave owners millions of pounds (the equivalent of 200 billion pounds [today]) in compensation, but they also took out a huge loan from the Rothschild Bank in 1835 to pay slave owners, and British taxpayers paid off the loan over the next 180 years, concluding only in 2015.

“They make enslaved Jamaicans pay this compensation through forced labour for six years. Slave owners, especially in Jamaica, were given money for dead souls – enslaved people that died on their plantations before 1838 and, in some cases, black people that they actually killed,” said Manjapra.

He was a guest lecturer at the Centre for Reparation Research at The University of the West Indies, Mona, last Wednesday.

Manjapra said that the new findings reveal information that was buried in the valuation reports at the National Archives of the United Kingdom (UK) and indicate that the emancipation process itself was also a crime against humanity.

“This is a very serious and pertinent issue that countries such as Jamaica must take up. Neither the British monarchy nor its government has ever apologised for slavery.

“Their former prime minister, David Cameron, even said it was time to ‘move on’ and offered to build a prison here in Jamaica instead, and for 180 years, British taxpayers have actively underwritten and supported the emancipation crimes against the Jamaican peoples,” Manjapra noted.

As a consequence, Manjapra said, black Britons, through their tax dollars, were forced to pay for the racial crimes of emancipation.

“Windrush Jamaicans were forced to pay for the racial crimes of emancipation, and what that means is that Jamaica, which has been subjected to astronomical debt by foreign creditors, especially British banks, has been paying Britain for 180 years to support its ongoing servicing of the slave owner bonds,” Manjapra stated.

He said that the turbulent Brexit negotiations and the Windrush scandal have opened the door for a reparations argument.

New historical evidence has been uncovered showing how the crime of slavery and emancipation continued to be ‘paid forward’ to the benefit of white British society and to the detriment and harm of black Jamaican people, and all Jamaicans.

Manjapra said that in order to carry out Brexit, the UK government is paying £600 million per week, with the ‘divorce’ bill currently calculated at £39 billion. This clearly shows that the British government can pay for the things it prioritises, he said

“Britain has never offered a penny to the enslaved,” he said.