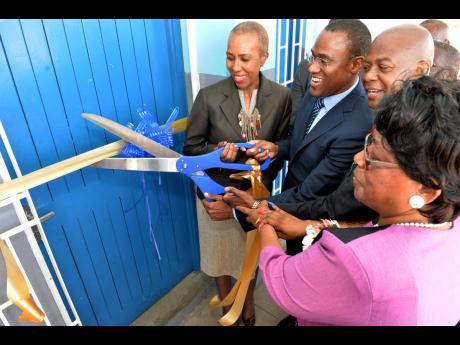 Contributed
From left: Minister of Science, Energy and Technology Fayval Williams; Minister of Finance and the Public Service Dr Nigel Clarke; Chief Executive Officer of the Universal Service Fund (USF), Daniel Dawes; and principal of Maverley Primary and Junior High School Dorothy Taylor cut the ribbon to officially open a new computer lab/access point at the school earlier this year. The new lab was funded by the USF.

“If you limit your actions in life to things that nobody can possibly find fault with, you will not do much!”

– Alice in Wonderland, by Lewis Carroll.

In this series, I have developed an unconventional approach or outside-the-box strategy that is likely to help Jamaica in her efforts to alleviate poverty by providing free-of-charge lifeline electricity for the poor. I have referred to the evolving and dynamic nature of thresholds for international and national poverty lines. There remains a general consensus that one size does not fit all. Some countries are relatively poorer than the others.

In 1965, shortly before the United States government adopted the guidelines for poverty, Mollie Orshansky wrote: “There is not, and indeed in a rapidly changing pluralistic society, there cannot be one standard, universally accepted and uniformly applicable, by which it can be decided who is poor … . If it is not possible to state unequivocally ‘how much is enough,’ it should be possible to assert with confidence how much, on an average, is too little.”

The National Policy on Poverty and National Poverty Reduction Programme (Government of Jamaica, September 2017), in developing national poverty line, relies on the underlying principle of ‘how much, on average, is too little’. According to the policy paper:

“To this food poverty line, the basic value of non-food items is then added to obtain the poverty line for Jamaica ... . Total ratio of food cost to non-food cost is approximately 2:1 ... .

“In 2014, the poverty line was estimated to be $169,044. If an individual’s consumption is below this figure, then that person is considered to be in poverty … .

“The prevalence of poverty in Jamaica has trended upwards since 2008 and is consistently highest in rural areas. In 2012, the national poverty prevalence was 19.9 per cent of the population, with the food poor representing 7.5 per cent.”

Based on Poverty Policy’s definition, in 2015, the national poverty prevalence was estimated at 21.2 per cent, with a food poverty rate of 6.9 per cent (no recent data are available).

The poverty paper’s mission statement reads: “Within the overall framework of Vision 2030 Jamaica, the policy and programme aim to eradicate extreme poverty and reduce absolute poverty at the national and sub-national levels. The intermediate outcomes of the policy are the strengthening of the institutional and legislative environment and providing a framework of cooperation among state and non-state actors for sustainability of the poverty reduction efforts.”

The policy objectives, among others, include “equitable access to basic goods and services”. Let us acknowledge that those below the poverty line in Jamaica do not have adequate income to afford food, shelter, clothing and energy, all at the same time. At the current poverty threshold level, they cannot afford and will not pay for electricity, even if they were provided with legalised connections.

With respect to universal and reliable access to modern energy, affordability therefore remains a prime concern for policymakers and it is not a matter of choice.

In 2005, Jamaica had established the Universal Access Fund (UAF) in order to “ensure that every resident of Jamaica is provided with easy and reliable access to the information superhighway through the deployment of broadband services, to facilitate the transformation of Jamaica into a knowledge-based society, and to stimulate continuous improvement in the quality of life for all”.

In 2012, the Universal Service Fund (USF) replaced and assumed the responsibility of the UAF. The USF is financed through a levy of US$0.3 per minute on international calls to Jamaica, terminated to fixed lines and US$$0.2 on calls to mobile lines. The Fund collects over a billion Jamaican dollars a year.

While we are collecting for universal access to telephony and broadband through the USF, we have failed to address the necessary ingredient, providing electricity to connect! After 14 years and billions of dollars of scarce USF-generated funds from the telephone rate payers, we have little to show in terms of universal access.

I quoted the example of Thailand, which has dealt with the issue of income inequality, and the inability of the poor, for access to affordable electricity. Lessons for Jamaica, where the poverty threshold is much lower than in Thailand, is to establish a public service obligation mechanism that is a set quantity of electricity provided at no cost to residential consumers who are below the national poverty line.

It is agreed that the provision of secure, affordable and modern energy for all citizens is central to poverty reduction and economic growth. Without the provision of lifeline electricity for the poor, we will not alleviate poverty or succeed in universal access. The approach I suggest aims to attain, among others, the following socio-economic objectives:

a. Improving the education level and literacy rate among the poor;

b. Providing economic empowerment and expansion of opportunities for the poor to attain sustainable livelihoods;

c. Remove social stigma that the ‘poor are thieves’;

e. Lower the average cost of electricity to all ratepayers by reducing the level of non-technical system losses;

f. Removing the unnecessary cross subsidy to all residential customers by eliminating so-called ‘lifeline tariffs’ that, for all practical purposes, distort prices and achieve nothing;

g. Helping to establish realistic levels of non-technical losses rather than offering obscure excuses that the high losses occur because there are 180,000 illegal connections;

h. Mandating the utility company to take responsibility for the theft that is perpetrated by its affluent ‘customers’, the cost of which should not be borne by all ratepayers.

The Policy on Poverty, which defines the poor and establishes criteria to select the target population or communities, has answered the question of who are the poor in Jamaica. To develop a dynamic database of target population and communities that will qualify for free-of-charge electricity, we will have to rely on the existing institutional framework.

One important caution, though; the target population should not be selected on the basis of political divide or through ‘pilot projects’ that might target politically favoured communities.

For quite some time now, Jamaica has followed many initiatives to reduce poverty through community-renewal programmes that provide social safety net to the vulnerable. Over the years “Jamaica Social Investment Fund has been creating and developing partnerships with other organisations” to achieve this objective.

As the proposed strategy spans across multiple public- and private-sector entities, this programme should be developed and coordinated under the auspices of the Cabinet Office, with support from all relevant government and non-government entities.

With this column, I conclude this series.

Zia Mian, a retired senior World Bank official and former director general of the OUR, is an international consultant on energy and information technology. He writes on issues of national, regional and international interest. Send your comments to mian_zia@hotmail.com or columns@gleanerjm.com.