Curtis Ward | War drums in Washington, echoes of the past 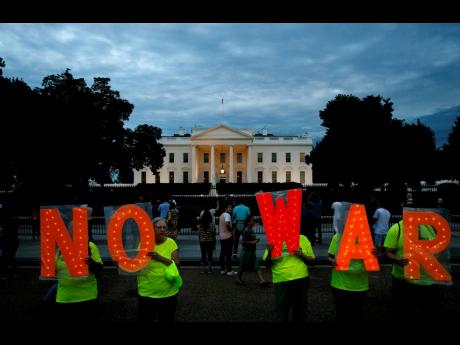 AP
Protesters hold signs spelling out ‘No War’ outside the White House, on June 20, in Washington, after President Donald Trump tweeted that ‘Iran made a very big mistake’ by shooting down a US surveillance drone over the Strait of Hormuz in Iran.

The louder the war drums in Washington, the more one thinks of what has been and what the future portends. The grainy video presented to prove Iran’s culpability in the attack on the oil tankers in the Gulf of Hormuz purportedly showed the Iran Revolutionary Guard Corps (IRGC) removing unexploded mines from the hull of one of the tankers.

The video was not conclusive evidence to support the claim of Iran’s complicity in the attacks. The Trump administration claimed it had other evidence, yet failed to present supporting evidence to overcome Iran’s denial of its own direct involvement or ordering any of its proxies to carry out the attacks. European countries, with few exceptions, were sceptical of the claims out of Washington and were asked for indisputable evidence.

A US-Iran military conflict would be devastating for Iran, destabilize the entire region, and the ensuing impact on the global economy would be at an un-imaginary scale.

Since most do not believe Iran wants a suicidal war with the United States, it raises the possibility the attacks on the oil tankers could have been orchestrated elsewhere other than Tehran. Terrorist groups, such as ISIS and al-Qaida and others less well known, would welcome another Middle East war as an opportunity to resuscitate, grow and extend their reach. Also, countries in the region that are enemies of Iran that encourage destructive US military actions against Iran could see this as an opportunity to further their cause. However, if Iran’s denial of culpability is to be believed, it would suggest the IRGC was engaged in mitigating action to prevent a US military attack.

In the wake of deep global scepticism, and with the situation remaining fluid and dangerous, new issues since that have emerged have pushed both countries closer to military confrontation. The US military disclosed that Iran shot down one of its drones in international space over the Strait of Hormuz. Iran, while admitting to downing the unmanned aircraft, claimed it was in Iran’s air space and its action was in defence of its territorial integrity.

In what would amount to a significant escalation of the situation, President Donald Trump ordered a surgical military strike to destroy the site from which the Iranian missile was fired at the US drone. President Trump revoked his military order within minutes of the impending attack, saying he rescinded the order to prevent the loss of collateral damage to human lives which would have been disproportionate to destruction of the unmanned aircraft.

In lieu of a military response, President Trump imposed new targeted financial sanctions on Iran’s Supreme Leader and others close to him, including military leaders. Considering the Iran sanctions already imposed since the US withdrawal from the Joint Comprehensive Plan of Action (JCPOA), the effect of these new financial and travel sanctions will be marginal. At least for now, the war hawks in Trump’s administration and among Republican legislators have failed to persuade the president to go to war.

Iran is far from blameless for the region’s instability and insecurity, and the IRGC is a known major sponsor and facilitator of terrorist groups, but the current Iran crisis was created in Washington. President Barack Obama’s administration successfully led difficult negotiations to halt Iran’s pursuit of nuclear weapons. President Trump’s abrogation of the JCPOA and imposition of harsh sanctions on the Iranian government and entities have resulted in devastating consequences for Iran’s economy. A revived Iran crisis reversed the stable geopolitical and strategic environment bequeathed by President Obama.

Iran’s capacity to block shipping through the Strait of Hormuz and disrupting global oil supply and economic stability is not in doubt. However, the debilitating effects of US sanctions on Iran’s economy evoked a threat from the Iranian government to exercise that option. This threat may be seen as self-preserving and as a bargaining option for Iran’s leaders.

Though claiming the sanctions were intended to force Iran to cease sponsorship of terrorism in the region, the Trump administration’s stated objective is to effect regime change. Iran’s leaders may be desperate to forewarn of the heavy price to be paid if they are attacked militarily.

In this milieu of claims and counterclaims, and the Trump administration’s failure to provide the ‘indisputable evidence’ in its possession, mere words will not suffice to overcome the scepticism surrounding Washington’s true mission of regime change. The international community will support re-imposition of UN Security Council sanctions on Iran and Iranian leaders if provided with unassailable proof. Furthermore, for Iran to have future negotiating leverage with the international community, it cannot be seen as the villain.

NO ONE WANTS WAR

The recent disclosure by the International Atomic Energy Agency that Iran has violated one of the JCPOA’s single most important provisions of limiting Iran’s stockpile of processed uranium places the Europeans in an untenable situation. The Iranian government said this is reversible if the Europeans implement a process as promised to protect Iran from the US sanctions. The most recent seizure of an Iranian tanker by the British, and Iran’s threat to seize a British tanker in return, is exactly what the Trump administration has been hoping for.

These new developments intensify pressure on the Europeans to join the US in crashing the JCPOA. With the British traditionally siding with the US, and Britain’s imminent exit from the European Union, European disunity and the demise of the JCPOA now seems imminent.

Notwithstanding Washington’s obfuscations on regime change in Iraq some 16+ years ago, and cynicism about the true objectives of the Trump administration on Iran, the IAEA report is advantageous to the Trump administration. The JCPOA violation could trigger an automatic re-imposition of Security Council sanctions removed under the agreement within 30 days without the possibility of a veto.

Not to be discounted is the simple fact that Iraq’s degraded and disorganized military in 2003 is incomparable to Iran’s current sophisticated and missile-armed military. Also, through its many proxies, Iran has the capacity to unleash an asymmetric war against the US, its allies and interests far beyond the region.

No one wants a US-Iran war which will result in many casualties on both sides and the further instability of an already dangerous Middle East. The lessons of the Iraq war of 2003 and the resulting proliferation of international terrorism seems to have faded in memory.

- Ambassador Curtis A. Ward is the adjunct professor at the Homeland Security Graduate Program, University of the District of Columbia. Email feedback attycward@gmail.com and editorial@gleanerjm.com.