Disability has no hold on exceptional Brianna 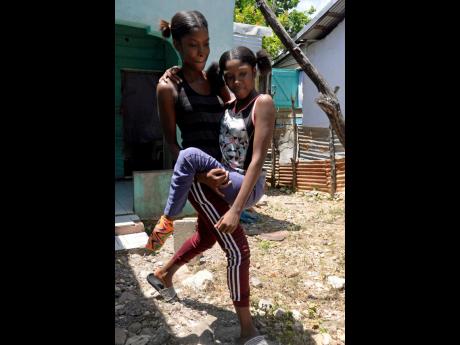 File
Brianna Harris is carried around by her twin sister, Brittania, at their home in Effortville, Clarendon. 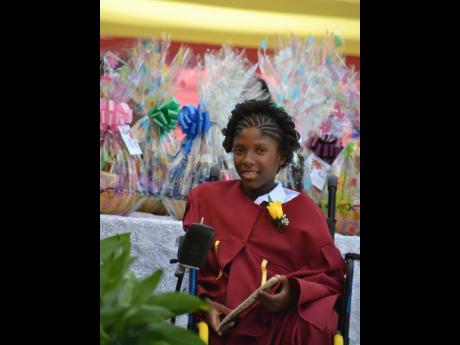 Central High School in Clarendon erupted in celebration last Thursday, as Brianna Harris, a 16-year-old who was crippled by a gunman’s bullet a decade ago, was hoisted on to the stage during her graduation ceremony.

Brianna and her twin sister’s lives were changed forever when, at age six, she was struck in the back by a bullet during a robbery at May Pen Market in Clarendon. It left her crippled and without a leg.

Since then, she has been confined to a wheelchair or the hips of her loving sister, Brittania, who carries her to school, to the shop and almost everywhere else she needs to go.

On Thursday, however, Brianna blushed, and at times was brought to tears as her classmates clapped and cheered for her accomplishments.

She graduated among the top students in her class, and among the top 10 students who have benefited from the James and Friends Education Programme, a non-profit organisation that assists more than 200 impoverished students in the tough central Jamaica parish each year.

Brianna’s exploit landed her a $200,000 scholarship to return to sixth form, while her sister was also awarded $140,000 for further studies.

The teen was also surprised with a brand new wheelchair and will benefit from a ramp that is to be built, leading from her house to her gate, which opens on to ‘John Crow’ Lane – one of the deadliest areas of Effortville, otherwise called ‘Farm’, in Clarendon.

“I feel happy and I am very grateful because now I can move around without help if somebody is not here. I can leave out and go to the shop and buy things like ice cream or go visit my friends by myself,” said a smiling Brianna, who has been receiving much attention since a Sunday Gleaner article highlighted her situation last month.

“I feel very good but I also feel shy at the same time because I am not used to it (attention),” she added, still smiling.

Brianna, who wants to become an entrepreneur, is awaiting the results of five Caribbean Secondary Education Certificate (CSEC) subjects.

Her sister will also look to enter sixth form at Central High, before taking up studies at HEART Trust/NTA.

“I’m very grateful for the assistance that we have been getting because now I can get to go out more because I know that she (Brianna) can help herself more to move around,” said Brittania, who has been a tower of strength for her sister during the recovery years.

She not only helped her twin sister through the pain but also with routine daily tasks around the house.

On Friday, Otis James, president of the James and Friends Foundation, said he was particularly impressed with Brianna’s progress.

“There are a lot of students with their two hands and two feet who are not getting the grades that she is getting,” James added, giving kudos to the Central High administration that pulled out all the stops to ensure that the children sat their exams and were ready for graduation.

Wayne Brown, chief financial officer at the Clarendon Parish Council and pastor at the Hour of Truth Ministries in Mineral Heights, said Brianna’s resilience is an example to all struggling students in the crime-plagued parish. He is one of the sponsors of the programme.

“Her story is very touching, and just to know that the foundation could have been of assistance to her is remarkable. Once you can cause a smile to be on a child’s face, it makes you feel like you have accomplished what God would have placed you on the Earth to do,” said Brown.