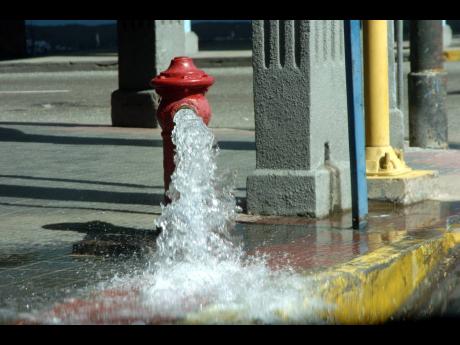 Water going to waste from a fire hydrant in Kingston.

Climate change is now affecting everyone. It is also affecting economies and daily life in general.

UN Chief Antonio Guterres has called on governments “… to stop building new coal plants by 2020, cut greenhouse emissions by 45 per cent over the next decade, and overhauling fossil fuel-driven economies with new technologies like solar and wind.” The world, he said, “is facing a grave climate emergency”.

The heatwaves that have been occurring in different parts of the globe are cause for concern, and this will negatively affect the poor, especially with respect to health costs and energy consumption. The homeless who have no shelter will also be negatively and directly affected. So, there needs to be emergency funding made available to the poor.

Now is the time funding and subsidies should be made available to the poor and those in rural areas. This will help small businesses to cope with the high energy costs that will arise.

The priority must now be to plant more trees and relocate those who are closer to highly forested areas in order to prevent tragedy through fires. Nations also need to establish more water wells to deal with this crisis, as the excessive heat will require more water usage.

Furthermore, the ground water will disappear and we have the opportunity now to collect it before it does.

What has happened in India , where it’s sixth-largest city has run out of water — with almost 10 million people without water — should be a lesson to us all.

Nations need to stop the lip service and begin to put serious emergency plans in place to avoid tourism fallout. This is especially true for the Caribbean and Latin America.

More people will want to go to cooler destinations — places like Russia, Alaska, Norway, Holland and their tourism numbers will begin to increase as the world weather crisis intensifies. This is not good for investors.

The water shortage has the potential to affect hotels, prisons, schools, hospitals, shelters. It can also affect airports and trigger shutdowns. Urgent plans need to be put in place to prevent the spread of diseases, particularly where the viruses or bacteria thrive in heat.

Also, additional fire trucks, water storage tanks and improved water facilities, are needed, as the poor, small children and the elderly are always the most vulnerable.

It is reported that 37 per cent of the honeybee colonies were lost over the winter. Honey supply to producers of cereals, some medicines and drinks is significantly affected. Contingencies and emergency plans need to be put in place for farmers because the heat and the floods, as well as hail and the wintry weathers, have the potential to seriously and irreversibly affect the agricultural industry, livestock and the fishing industry.

More water parks need to be set up for children to make use of as they play outside. It will keep them hydrated and less susceptible to the heatwaves.

Further to this, there is technology that allows water to be pumped every time children use the playground. And that is something worth looking into if we are serious about addressing this crisis.

In addition to all this, we must remember that this kind of crisis has the potential to push up already-rising oil prices, food costs and practically every cost that we can incur as human beings. So it is a dire situation that needs to be addressed with great urgency.

We cannot address climate change unless we decide to include the one who made the climate. Luke 21: 25–26, 2 Corinthians 7: 13, 2 Kings 8: 35-36 and Revelation 16: 21 speak to us about the distress within the earth, especially regarding climate change.

There are also things that we need to know that affect climate change. For example, prayer has a positive effect on the climate, as does atonement. Most countries are trying to legislate the Creator out of their nation.

During such urgent times, the focus ought not to be on dealing with the climatic issues through science only, but we must include a wider cross section of individuals and deal with the matter holistically.