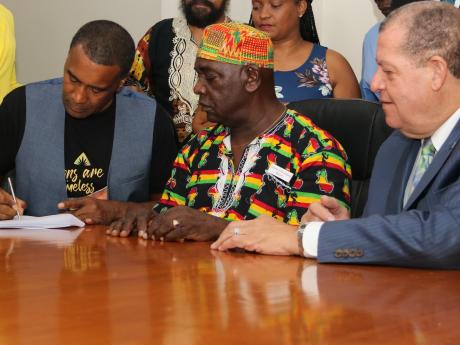 Industry, Commerce, Agriculture and Fisheries Minister, Audley Shaw, says a formal system is being put together for small farmers interested in the growing of cannabis for medicinal purposes.

Shaw made the disclosure in an address at the signing of a tripartite agreement, under the Alternative Development (AD) Project, at the Ministry’s New Kingston office today.

The project is being implemented as a strategy to transition traditional cannabis farmers from an illicit framework into the regulated environment, which is currently the purview of the Cannabis Licensing Authority (CLA).

The project aims to promote sustainable development and poverty eradication and also to ensure that the Dangerous Drugs (Amendment) Act of 2015 is enforced through the protection of the human rights for all citizens including traditional ganja farmers.

Signatories to the agreement under the project include the Accompong Town Maroons from St Elizabeth, Timeless Herbal Care and the CLA.

“This is the first of two major pilot projects and is to be launched in the second quarter of the 2019/20 financial year. The second one will be done in Orange Hill in Westmoreland,” Shaw informed.

The signed agreement sets out the terms and conditions upon which the total crop of ganja is cultivated in accordance to the authorisation issued to the Accompong Town Maroons.

It also details how the crop will be purchased by the CLA for the sale of an agreed amount to Timeless Herbal Care in accordance with an invoice submitted by them.

Colonel of the Accompong Maroons, Ferron Williams, said the agreement was signed with the understanding that traditional ganja farmers and their families will be able to benefit.

He also committed to supporting the initiative and pledged the cooperation of the maroons.

For his part, President and Chief Executive Officer of Timeless Herbal Care, Courtney Betty, extended appreciation to the maroons for facilitating the initiative.