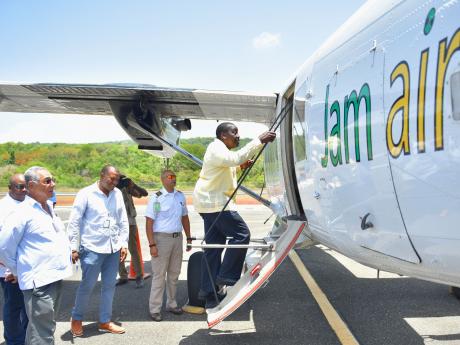 The Government is exploring the possibility of outsourcing the management of some operations at the Ian Fleming International Airport in Boscobel, St Mary.

Transport Minister, Robert Montague, said that discussions are being held with representatives of an international organisation to “take over aspects of the operations.”

He was speaking during the recent launch of domestic flight service at the airport by local aviation company, Jam Airlink Express.

He said outsourcing is being pursued with a view to maximising the airport’s commercial viability.

He said that the organisation has credentials in airport management.

The entity operates the airport in the Turks and Caicos Islands, which records an average 30 jet arrivals daily, with 78 landed on Christmas Eve in 2018.

While noting that Ian Fleming’s flight activity does not rival those statistics, Montague said the requisite interventions will be made because “we want to [increase] the numbers”.

Meanwhile, he informed that work is to begin during the current fiscal year to construct a new police post at the airport.

“The Minister of National Security [Hon. Dr. Horace Chang] has committed to get that project going… because we want to [among other things] develop this airport into a community airport,” Mr. Montague said.

Domestic flights resumed on Monday at Ian Fleming Airport with the commencement of daily service by Jam Airlink Express.

There are also flights scheduled out of the Sangster International Airport in Montego Bay, where Jam Airlink is based, Negril, and the Tinson Pen aerodrome in Kingston, between 7:00 a.m. and 5:00 p.m. daily.