‘Tracks on Streets’ makes a difference in Allman Town 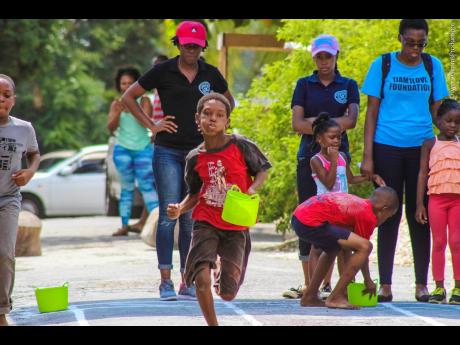 One of the initiatives that has been implemented is ‘Track on Streets’. This is a back-to-school sports day, which is held on a main street in Allman Town, where all children who participate are given back-to-school materials and scholarship opportunities.

Now in its sixth staging, Ellis said that it has become a staple event in the community, attracting the support of community members and businesses in the area.

“Our mantra is ‘Road block without a loaded Glock’, so every year we block the road and the children compete,” he shared with committee members of the Violence Prevention Alliance, where he was the guest speaker recently.

He said the event included potato and math races and was becoming increasingly popular, as persons from as far as Manchester attended the event to compete. The last staging of the event attracted some 200 patrons. This year’s staging is set for August 24.

The association also has another major initiative – an inner-city quiz competition where children from Allman Town compete with other children from communities such as Denham Town, Tivoli Gardens and Trench Town.

“The programme really helps because they start to study long before GSAT, and what we do is give them questions that they are likely to get in GSAT. This has helped in their preparations for the exams,” he said.

The association is made up of 16 young persons and is supported through dues from the members. Meanwhile, the initiatives are financially supported by young people from the community and local businesses. These small community-based efforts have supported several underprivileged youth to attend school through the provision of scholarships.

Persons interested in supporting the programmes may reach Ellis at kevaughn_ellis@yahoo.com or 876- 398-2404.