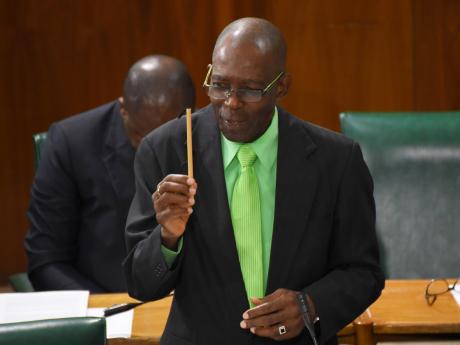 Minister without Portfolio, Ministry of Agriculture and Fisheries,  J.C. Hutchinson, has announced that the structure of the government’s Farm Road Programme has been changed.

“Members of Parliament, councillors and farmers’ organisations who would like a road to be rehabilitated should make their request to their Rural Agricultural Development Authority (RADA) Parish Manager in writing,” he said as he made his contribution to the Sectoral Debate in the House of Representatives on Tuesday.

“The Extension Officer for that area will then go and do a preliminary assessment of the roads to ascertain the level of agricultural production in the area,” he explained.

Hutchinson said this information is then sent to the local RADA Parish Advisory Board, which then determines which roads can be done based on the funding allocated to the parish.

“This recommendation is then sent to the RADA National Board for approval,” he noted.

He pointed out that there have been instances where roads were submitted that are not farm roads, and this has slowed down the process of implementation.

“With this current structure, there is transparency and accountability for the project. We are also in the process of establishing a memorandum of understanding with the Municipal Corporations to oversee the roadwork done in their respective parishes,” Hutchinson said.