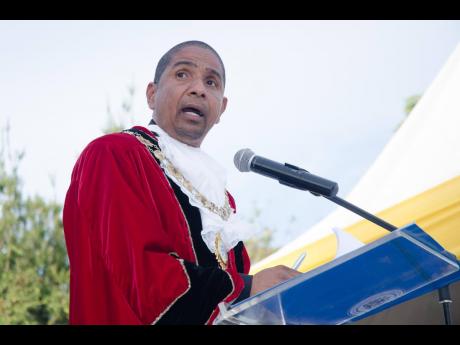 Professor Ibrahim Ajagunna will act as president of the scandal-scarred Caribbean Maritime University, following a decision by the University Council on Monday.

Ajagunna, who is vice-president of academic and student affairs, will be in the post for six weeks while President Professor Fritz Pinnock proceeds on a leave of absence amid a corruption probe at the institution being carried out by the Financial Investigations Division.

According to a press release from the university, Ajagunna has worked at the CMU since 2006 and is widely regarded as an extraordinary leader who has spearheaded the development of a variety of programmes, which have expanded and diversified the university’s offerings and shaped key initiatives.

He holds a Doctor of Philosophy from the University of the West Indies, Mona, a Master of Science degree from Sheffield Hallam University in the United Kingdom, and a higher national diploma from the Federal Polytechnic, Idah in Nigeria.

He also holds a postgraduate diploma in education from the University of Technology, Jamaica and an advanced diploma in teaching from the City and Guilds of London.

Entertainment events to be limited at Hope Gardens

The Kingston and St Andrew Municipal Corporation (KSAMC) has taken a decision to limit the number of entertainment events on the grounds of the Hope Botanic Gardens in a bid to reduce the noise nuisance to residents in the surrounding areas.

Speaking at yesterday's KSAMC meeting, Mayor Delroy Williams said this was in response to a series of complaints from the residents regarding noise nuisance.

The mayor said a the municipality is in dialogue with the operators on the matter.

He said recommendations have been received from the operators regarding the decibel levels for events that they host on the property.

“It’s our responsibility to review the recommendation to see whether or not those levels are appropriate in terms of the special situation in Hope Pastures,” the mayor said.

He noted that the levels recommended are in keeping with international standards, adding that a meeting will be held with the citizens of Hope Pastures.

The Trinidad and Tobago Police Service (TTPS) says it will commence polygraph testing of all regular and special police officers as part of drive for greater accountability within the force.

The TTPS said that the polygraph testing will be conducting across all divisions.

Media reports said that several police officers in the southwest peninsula were seeking legal advice to prevent them having to undergo the tests.

Police Commissioner Gary Griffith said that while the vast majority of officers have been doing commendable jobs, "a few officers, because of their involvement with criminal activity, are permitting the entry of illegal drugs, guns, and human trafficking from the mainland (South America)".

He added: “Polygraph testing is not an avenue to target guilt, but is used by many law-enforcement agencies worldwide as a barometer to assist in ensuring that there are no breaches in sensitive areas.”

Griffith said that every police officer was willing to be polygraphed and drug tested prior to entering the service and that he sees no reason for an officer to be reluctant “unless the officer’s ethics have changed".

He said he will be the first officer to take the polygraph and drug tests.