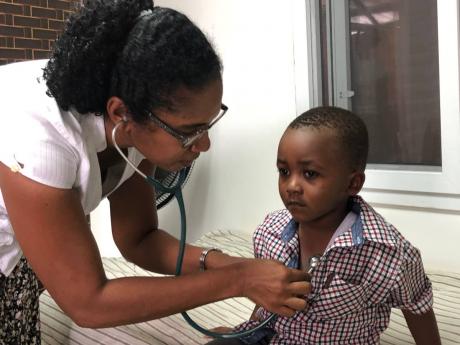 Contributed
Three-year-old Tyreke Heath is checked by Pediatric Dr. Tracy Evans-Gilbert during a visit at the GAiN Jamaica free health fair at the Lilliput Community and Resource Centre 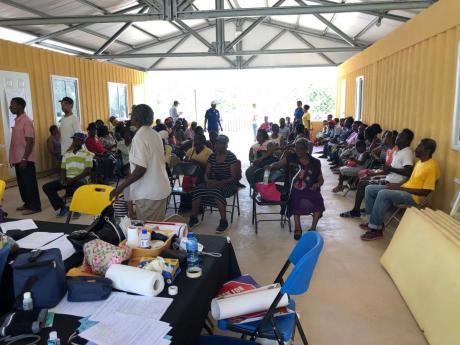 Contributed
A section of the crowd waits to be seen by the medical team during the GAiN Jamaica free health fair at the Lilliput Community and Resource Centre.
1
2

The Global Adventist Internet Network (GAiN) Conference held July 4-6 at the Iberostar Hotel in Montego Bay culminated with a recognition ceremony that delivered a pleasant dose of inspiration and a few unexpected awards.

The ceremony was planned to recognize and express gratitude to persons who have demonstrated, excellence, dedication to mission and commitment to God and country in the area of communication.

President of the Jamaica Union Conference of Seventh-day Adventists (SDAs) Pastor Everett Brown said the Union wanted to celebrate the value the awardees have added to the mission of the church.

“Being singled out for recognition was not because of any personal, selfish or political consideration. You have excelled ... you have assisted us as we seek to position the church in the best possible light and as we fulfil our mission under Jesus Christ,” Brown said.

Six persons were awarded in the category ‘Traditional Media’.

Producer and host of CVM TV’s Inspire Jamaica, Kerlyn Brown was awarded for outstanding contribution to journalism and media in the area of human interest. The programme highlights children struggling with illness and offers them assistance.

Brown collected her award along with one of her ‘inspirees’,Jordane Jarrett who has cerebral palsy. She was able to help Jordane have two surgeries done so he could walk on his own.

“Jordane and his mom Alecia happen to live close to where this function is so it was my honour to have them join me and share the moment, representing the wider family of Inspire Jamaica,” Brown said.

Other awardees in the category include former Chairman of the RJRGLEANER Communications Group, Oliver Clarke, executive editor-special assignment at the Jamaica Observer Desmond Allen and 2017 and 2018 Press Association of Jamaica (PAJ) journalist of the year; producer and anchor at Television Jamaica Andrea Chisholm. They were awarded for outstanding service to journalism in Jamaica.

Professor in the Department of Communication at Oakwood University, Dwyane Cheddar was awarded for outstanding service in the area of media and production and commitment to the mission of the Global Seventh-day Adventist Church while General Manager of the Northern Caribbean University (NCU) Media Group and host of the radio programme First Light on NCU FM, Arnold Kelly received an award for outstanding service and commitment to media ministry both locally and regionally.

Other persons were recognised for outstanding contributions to Media and Communication in Jamaica Union Conference (JAMU) field.