‘Stories with Metal’ gets high-profile attention 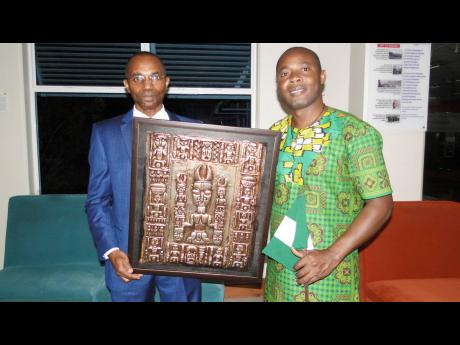 Paul Williams
He likes it, so he buys it. Jamaica Defence Force Chief of Staff Lieutenant Rocky R. Meade (left) is now the owner of ‘Onile’ (‘The Owner of the Nile’). Here, he poses with it and the artist himself, Alao Luqman.

When he got the chief of staff of the Jamaica Defence Force, members of the diplomatic corps, high-profile university professors, and other dignitaries to turn up at his first solo art exhibition in Jamaica, have he must known that his work has some value.

He is multitalented artisan/academic and Nigerian cultural diplomat to Jamaica, Alao Luqman, and on Monday evening, Janet Olisa, Nigeria’s high commissioner to Jamaica, opened his exhibition inside the foyer of the Regional Headquarters of The University of the West Indies, Mona, located along Hermitage Road in St Andrew.

Called ‘Stories with Metal’, the exhibition is being staged by the Nigerian High Commission in collaboration with the Jamaica Business Development Corporation (JBDC) under the theme of celebrating the rich cultural heritage between Nigeria and Jamaica and is showcasing Luqman’s chasing- and-repoussé art until July 30.

Chasing and repoussé is a technique in which impressions are etched into both sides of a panel, metal or otherwise, to create images and other items. Yet, the stories they tell in totality are not arbitrary. They are purposeful, well-thought-out stories, especially the Yoruba ones. Luqman is Yoruba, which is a western Nigerian ethnic group.

He was introduced to the technique in a workshop in 2008, and since then, he has taken it from the brink of extinction, for it was a dying art. It was customary for the panels to be made from moulds so that they could be easily replicated. Now, Luqman has been making individual pieces freehand. In essence, the images in his panels are different, telling their own stories.

“My artwork takes a critical view of traditional African and Caribbean both in social, political, and cultural practice of day-to-day life. I deconstruct the Maroon, Taino, and Yoruba art, coined with Benin style, motifs, and images in which many of the traditional cultural methods, such as carving, casting, and assemblage, can be seen in my works. Having engaged subjects as diverse as the cultural movements, styles, motifs, signs, and symbols, my work reproduces familiar visual art, arranging them into new conceptually layered pieces,” Luqman says in his artist’s statement.

And in keeping with the theme of the showcase, High Commissioner Olisa said, among other things, “Aloa has brought to us this important connection, and if we continue to understand the connection between us, it means that we are on the right track, and the right track is to always remember, no matter the ocean that separates us, we are still one people, and that, I must say, is the joy of tonight.”

Since he came here in late 2017, Luqman and his compatriot, Pendor Peji, on federal government appointment through the Ministry of Foreign Affairs in Abuja as volunteers, have been training Jamaicans in the arts of beading, batik making and chasing, and repoussé. Luqman has worked with the Tourism Product Development Company; the Ministry of Tourism; the Ministry of Culture, Gender, Entertainment and Sport, and the JBDC.

In her address to the gathering, Valerie Viera, chief executive officer at the JBDC, said the cultural diplomats have been transferring skills and techniques to locals who are now using such to tell their own stories.