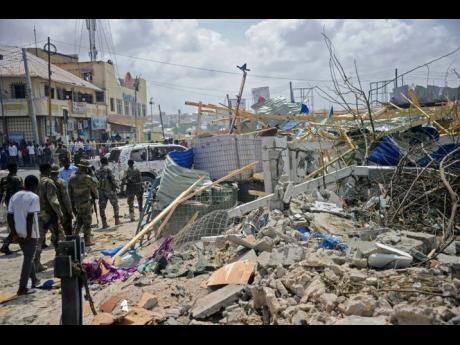 Soldiers on guard outside the Asasey Hotel following the attack

An attack on a hotel in Somalia has left at least 26 people dead.

According to reports, a suicide bomber drove a car laden with explosives into the Asasey Hotel in southern Somalia before gunmen stormed the building and opened fire.

Authorities say at least 50 people were also injured in the attack.

Islamist group al-Shabab has claimed responsibility for the attack.

Prominent Canadian-Somalian journalist Hodan Naleyah, her husband, Farid, and several foreigners are believed to be among those killed.

Authorities confirmed that a local politician, two Americans, one British citizen, three Kenyans and three Tanzanians died in the attack.

Four of the attackers were also killed.

Witnesses report that they heard a huge blast before several heavily-armed men forced their way into the hotel.

"I saw several dead bodies being carried from the scene and people fleeing from the nearby buildings," one man told reporters.

Nalayeh founded the media platform Integration TV to tell stories about life in Somalia and in the Somali Diaspora.

She moved to Canada with her family when she was six years old, but the mother of two recently moved back to her homeland.