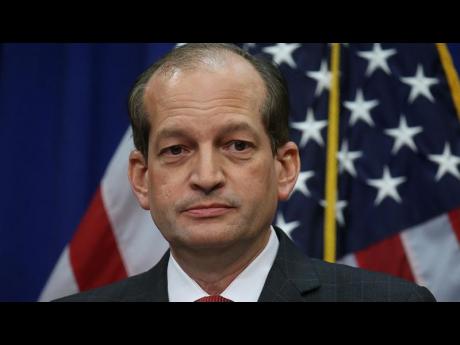 Acosta...It would be selfish for me to stay in this position and continue talking about a case that is 12 years old

Days after insisting that he would not resign, United States (US) Secretary of Labour Alex Acosta is stepping down amid criticism of his role in a 2008 plea deal for millionaire financier Jeffrey Epstein in a child sex case.

Acosta, a former prosecutor in the state of Florida, made the announcement at the White House yesterday.

He is scheduled to demit office in one week.

"I do not think it is right and fair to have Epstein as the focus rather than the incredible economy that we have today", the outgoing labour secretary said.

"It would be selfish for me to stay in this position and continue talking about a case that is 12 years old."

Trump said Acosta took the decision to step down.

He has pleaded not guilty.

Yesterday his attorneys requested bail, suggesting that he be held under house arrest at his multi-million New York home until the trial commences.

But prosecutors opposed the request, alleging that late last year Epstein tried to influence the case by paying US$350,000 to two potential witnesses.

As the then US Attorney in Miami, Acosta oversaw the non-prosecution deal handed to Epstein.

Under the deal, the millionaire hedge fund boss served 13 months in jail - with much of that time spent on work release at his Palm Beach office.