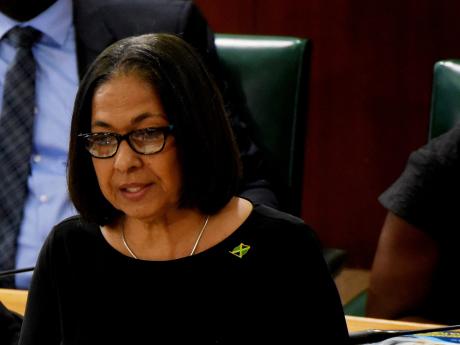 There is concern that disbursements from the National Insurance Scheme (NIS) is outpacing contributions and that there is urgent need to ramp up inflows to protect its viability.

Labour and Social Security Minister Shahine Robinson revealed that the NIS disbursed $19.4 billion last financial year. However, she said contributions were $17.9 billion, resulting in a shortfall of $1.5 billion. Jamaica has a pension population of 121,000.

“There remains a gap of $1.5 billion. As our eyes remain fixed on the scheme’s viability, the procurement process has commenced to undertake an updated Actuarial Review during this financial year,” Robinson told Parliament on Thursday.

“We are mindful also that the NIS, is to date, the surest form of social protection for our Jamaican citizens. Less than 50 per cent of the workforce contributes to the NIS. This is unacceptable, especially when we look at the statistics with respect to the ageing population and the demands that will be made in order to provide for their well-being and welfare,” she said.

The labour and social security minister pointed out that under the law, every Jamaican over the age of 18 must register with the NIS and that it is incumbent on the ministry to engage these persons wherever they are so that they can start contributing to the scheme.

“This will be in their best interest. I encourage employers to register those persons in their employ and to remind them that the NIS is contributory and it is the responsibility of the employer to ensure that all workers, contract or otherwise, contribute to the NIS in keeping with the provisions of the law,” Robinson said.

In the meantime, the social security minister said the net asset value of the National Insurance Fund (NIF) increased by 13.67 per cent over the 2018 fiscal year, which is valued at March 31 this year at $120.7 billion.

She said the growth was driven primarily by the performance of the equity portfolio, which grew by 31.3 per cent.