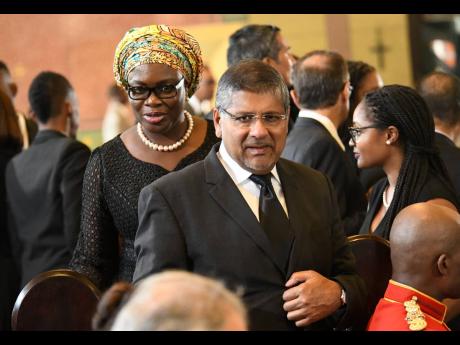 The United Kingdom’s high commissioner to Jamaica, Asif Ahmad, and his consular team recently demonstrated their efforts to strengthen their partnership with the local constabulary as they discussed issues of mutual interest with the police in Port Antonio, Portland. The Portland police were led by senior superintendent of police in charge of Portland, Duane Wellington.

The diplomatic mission said that the safety and security of British nationals is a primary concern for them. The consular team interacts with the police when they deal with victims of crime and their families. Tourists, in particular, need extra help if they have no local ties to Jamaica and have to return to the UK before their issues can be resolved. Consular officers also liaise with the courts, forensic labs, and other relevant authorities so that they can monitor progress and inform people waiting for updates.

The rate of crime in Portland is among the lowest in the country, and the consular team maintains a good working relationship with the police. For instance, in June last year, following the murder of an elderly British couple, for instance, the teams cite that the Portland police reacted swiftly, suspects were arrested and Wellington was instrumental in providing updates to both the high commission and family members in the UK.

Wellington expressed delight at the visit.

“It has enlightened us on the myriad of assistance given to the Jamaica Constabulary Force (JCF) year after year. The information shared was germane to the various services that the high commission provides to both locals and citizens of Britain. This will enable the strengthening of our partnership in service delivery going forward,” he noted.

High Commissioner Ahmad thanked the Portland police for their continued partnership and professionalism and outlined some of the UK’s programmes of assistance to Jamaica in the areas of security and sustainable economic development.

“Our interests are not just about the well-being of British citizens. Crime affects everyone, and visitors will be safe if Jamaicans feel secure in their homes and in their communities. In Portland, it is important that the police continue to remain vigilant so that it continues to be a parish that has less crime than other parts of Jamaica,” Ahmad pointed out.

Monday’s engagement came just days after Ahmad and the consular team led a town-hall meeting with returned residents in St Elizabeth, on July 4, alongside Deputy Superintendent of Police, Jonathan Boyd.

The parties met with residents and fielded questions ranging from safety and security to consular services and medical care.

For Boyd, who serves as zone commander for Nain, Junction, and Pedro Plains, there were many positive takeaways from the over-two-hour discourse.

“I’ve found that from a policing perspective, we need to be more involved with this type of grouping. We need to win back the confidence of some of those involved, and we need to expand this. This group seems be very vibrant and cohesive and if it could be emulated island-wide, it would be good,” Boyd noted.

“They (returned residents) have my reassurance, they have been given my number, and they already had the police presence… . Getting the trust of the people is critical to my way going forward. We have to work together to serve each other. We must develop that trust and coorporation, and this setting, this engagement, is a great start,” he added.

Ahmad used the opportunity to remind residents to take all necessary precautions to stay safe and commended the way in which the community looked out for each other and organised group outings.

He further committed to other parish stops, having already visited Manchester and Clarendon.