Ward of the State aims high 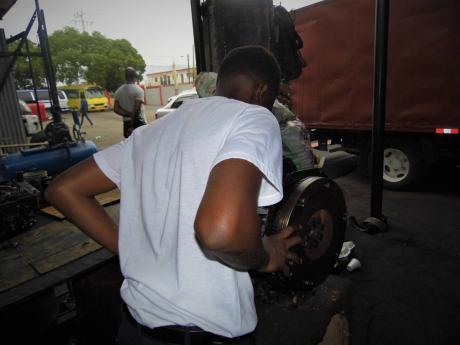 Contributed
Andrew Bent, a ward of the State, examines a motor vehicle engine at a garage where his father works.

“I went in confident and came out confident,” was how 17-year-old Andrew Bent*, a ward of the state, described his recent experience sitting Paper Two of human and social biology at the Caribbean Secondary Education Certificate examination.

A grade-10 student at a Corporate Area high school, Andrew appears very focused despite the situation which led him into foster care less than a year ago.

It was his apparent signature confidence which caught the attention of Davia Brown, chief financial officer at JN Life Insurance Company, who mentored him when he participated in a job-shadowing initiative recently, called ‘Children in Charge Day’. The project, spearheaded by the Child Protection and Family Services Agency, sought to expose children 15 years or older to the day-to-day leadership activities of corporate entities and organisations.

Andrew was one of 18 children who benefited from job-shadowing at subsidiaries of The Jamaica National Group and JN Bank branches across the country on the day. The initiative, now in its fifth year, was organised this year under the theme ‘Encourage, Enable, Include ME!’, as part of the agency’s activities to recognise Child Month.

“He was very articulate, well attired, and punctual. He extended his hand to greet me and made eye contact. What really captured me was his confidence. He was very engaging and actively asked questions. It was a day well spent,” Ms Brown related.

When Andrew’s social worker invited him to be part of the job-shadowing activity, he did not hesitate. Having been previously exposed to the working world, he welcomed the opportunity.

Eager for the experience, Andrew arrived at work after 6 a.m., despite the fact that his reporting time was at 9 am. He said that it was important to him to be on time, adding that he was never once late for his two-month summer job at a department store last year.

“I felt welcomed and I enjoyed the experience. I love the work environment and the employees were kind. I now have a greater appreciation for life insurance and how it works,” he pointed out, adding that he would love to work with JN Life Insurance Company this summer.

Andrew was a consistent high achiever at his former high school, which he attended for three years. Now at his new school, since last September, he has already made it on the principal’s honour roll, having maintained averages above 80 per cent. He also boasts several certificates for academic achievement from both schools.

In addition to human and social biology, Andrew is also doing mathematics this year.

“I’ll be doing six more subjects next year,” he disclosed, adding that he is doing a mixture of science and business subjects.

He stated that the secret of his excellent performance is listening attentively in class, doing homework, practising worksheets, and participating in class activities.

“I can’t study. I try it, but it doesn’t work,” he maintains. “When I have a test, I just scan through [my notes]. I participate in class discussions, which prevents me from other distractions; and that works for me 90 per cent of the time. Some children my age idle, but I don’t, because I always say it will affect my future,” he reasoned.

Andrew, whose dream is to become an aerospace engineer, intends to do the SAT after the completion of high school so that he can matriculate to a college in Vancouver, Canada.

Up to a year ago, Andrew’s dream was to be a soldier; however, he had a change of heart following a class discussion with his teacher about aerospace engineering. A subsequent Google research deepened his interest in the career. Since then, he has become intrigued about the flying and landing of aircraft.

It is not surprising that engineering has piqued his interest, as daily he is around motor vehicle engines at a garage where his father works. From a very young child, Andrew always accompanied his father to the garage. There is hardly a day that goes by that he isn’t there. After school, he heads straight to the garage, and during holidays he spends the entire day there.

“He reminds me of myself when I was younger,” said his father, Carl Bent*, said. “I had an interest in mechanic work and would stop at a garage, on my way from school every day. Andrew is very talented and knowledgeable. He catches on to things quickly. You only have to show him how to do something once,” his father revealed.

His mother, Lisa Bent*, resides overseas. She spoke with pride as she related her experiences with her son.

“I check on him daily to ensure that he reaches home safe from school. Whenever I can’t, I would ask someone to do so for me. He is honest, truthful, and dependable. If I don’t have any lunch money to give him, he would tell me, ‘Not to worry,’ and use the money which he saved.”

Similar sentiments were expressed by Andrew’s grandmother, Lilieth Sawyers*, with whom he has been living “on and off,” since he was a baby.

“He is a good boy. He is honest, respectable, and dependable. I like to see when young people hold up their heads. He is holding up his head. I try to encourage him not to get into bad company. I teach him to do things for himself. He has been ironing his clothes from he was nine or 10 years old, and he does a good job.”

The oldest of his three siblings, Andrew, a very good swimmer, enjoys going to the two rivers near his community with his friends, where they spend up to four hours on weekends.