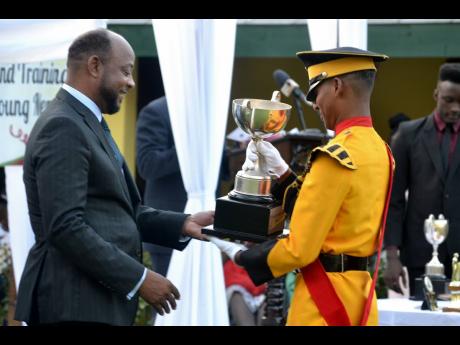 Carl Gilchrist
Outstanding student Khalil Kelly gets both hands on the Mary Jean Mitchell Green trophy after it was presented to him by Mayor of St Ann’s Bay, Michael Belnavis.

On the back of some excellent academic performances achieved while still in grade 10, a dozen industrious boys graduated on Saturday from Prospect College, a semi-military institution in Prospect in western St Mary.

It was a pleased principal, Gregory Wint, who spoke of the achievements of the students, including Khalil Kelly, who passed seven Caribbean Secondary Education Certificate (CSEC) subjects with distinction, including being the top student in integrated science in Jamaica.

Wint said that Kelly has been accepted by every university to which he has applied and has chosen The University of the West Indies, which he will enter in October to study actuarial science.

Chief executive officer of the RJRGLEANER Communications Group, Gary Allen, in his remarks challenged the graduates to not just fit in, but to stand out in their chosen fields.

Guest speaker Brigadier Radjh Mason outlined 10 rules to assist them to achieve their full potential as they continue on their journey.

The 12 students, drawn from six parishes, including six from St Ann, completed three years of training at the all-boys’ school, and based on their paramilitary training, are primed to enter the Jamaica Defence Force.

But they had several suitors.

These include Allen, who told the students that they were good candidates for journalism, while revealing that his career in the field started in that parish; Mason, who encouraged them to enlist in the army; and DCP Fitz Bailey, who is a past student of Prospect, who pointed to a career in the Jamaica Constabulary Force.

Wint, however, disclosed that after graduation, all the students are either heading to a tertiary institution or into a job.

Meanwhile, a parent, Brian Shaw, whose son, Anghel Shaw, was among the graduates, in his vote of thanks aimed at the Mitchell Green Foundation, which provides full scholarships to the students, was extremely grateful.

Shaw said that he felt good as a father as he watched his son grow and mature, meeting his expectations of him. Anghel heads to Northern Caribbean University in August to study information technology.