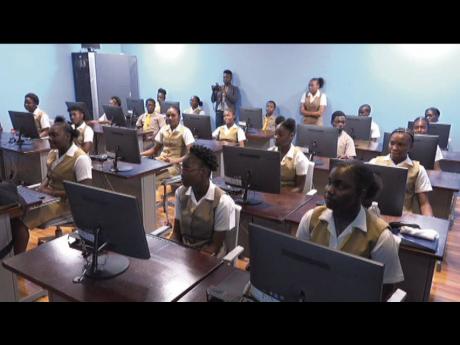 Erica Ewbanks, principal of Garvey Maceo High School in Vernamfield, Clarendon, says the opening of the fifth computer lab is a blessing to the institution.

The school was gifted with 21 new computers by the RCM Community Development Foundation, an America-based charity founded by nationals of Jamaica. The computer lab is also equipped with its own server and a printer. The principal said that RCM Foundation’s donation is “perfect timing”, noting that the issue of limited computer access negatively impacted the school in the recently concluded Caribbean Secondary Education Certificate examinations, as there were not enough computers available to students sitting computer-based examinations.

Ruel Reid, president of the RCM (not the same person as the embattled former minister), said the foundation started four years ago with a focus on sports. He said the decision was later made to venture more into educational activities. “You have to have the knowledge and the brains to play [sports], so I came up with the idea of a computer lab.”

Reid said the foundation’s computer lab initiative spans across all 14 parishes, with Clarendon being the fifth recipient. He added that the foundation is cognisant of the impact technology has on the world and as such, RCM is proud to support the concept of information technology in schools.

Ewbanks added that the infrastructure of the computer lab could attract more students in pursuing information technology. She said the limited number of computers has resulted in the school using a selective approach in registering students to pursue information technology in external examinations. Among the guests at the ceremony held on July 1 were Barrington Richardson, regional director for Region 6 in the Ministry of Education, and Noel Arscott, member of parliament for South Western Clarendon.