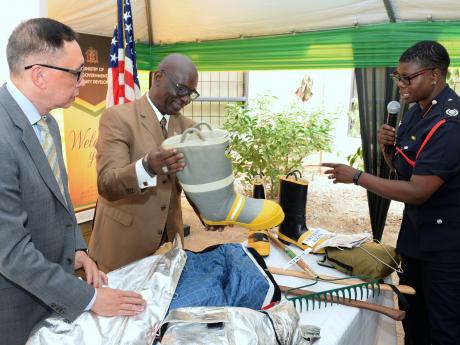 Local Government and Community Development Minister, Desmond McKenzie (centre), examines a fire proximity boot, which is among a number of equipment donated to the Jamaica Fire Brigade (JFB) by the United States Embassy in Kingston. At left is Chargé d’Affaires at the Embassy, Eric Khant and Superintendent, Kingston and St Andrew, JFB, Julian Davis-Buckle - Contributed photo. -30- D. Reid Photos

The Jamaica Fire Brigade (JFB) has received equipment valued at over $30 million from the United States Embassy in Kingston to strengthen its capacity.

The equipment will be distributed to the 34 fire stations across the island.

Speaking at the handover ceremony on Monday at the Ministry of Local Government in St Andrew, Local Government and Community Development Minister, Desmond McKenzie, expressed gratitude for the equipment, which he said will go a far way in saving lives.

“We are a grateful nation. It is of importance that when we ask the men and women of the Jamaica Fire Brigade to put their lives on the line that we do so by providing the necessary equipment to enable them to perform their duties,” he said.

“The Government has spared no expense in providing the requisite support to maintain the JFB. On behalf of the Government and the people of Jamaica, we express our thanks and appreciation. These equipment will come in handy and I know that you will use it to the best of your ability and continue to uphold the high standards you have set,” the Minister told the JFB members in attendance.

Meanwhile, Deputy Commissioner, JFB, Warren Malcolm, said the United States Embassy has been a very important partner of the JFB and has contributed to the growth and development of the Jamaica fire service.