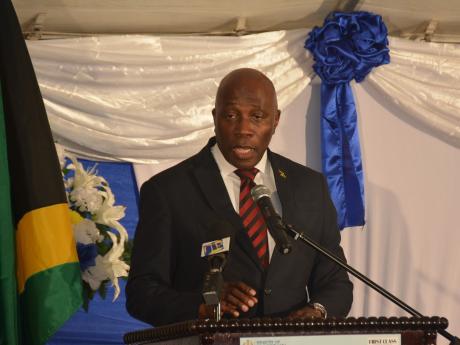 Chief Justice, Bryan Sykes, says the establishment of parish justice centres will help to further increase the court backlog clearance rate, which he says averaged at 103 per cent for the January to March quarter.

“We are clearing 103 cases for every 100 coming in [which] means we are dealing with the backlogs slowly but surely,” Justice Sykes while  addressing the official opening of the St Elizabeth Justice Centre last Thursday.

“We are now at the sixth (justice centre), and just imagine what the figures in the courts will look like when all 14 centres are established in Jamaica,” he noted.

He said that a 130 per cent clearance rate is being targeted.

“This centre that is being opened has a vital role to play in enabling us to achieve that target,” he added.

The justice centres are being established under an agreement with the European Union (EU) and are intended to clear backlogs and facilitate easier access to justice services by Jamaicans.

The St Elizabeth Justice Centre, located at Coke Drive in Santa Cruz, is equipped to handle matters related to child diversion and restorative justice as well as dispute resolution, among other justice-related issues.

Additionally, the facility will be a point of contact for the Custos of St Elizabeth and the justices of the peace.

It is the sixth facility to be opened, with the others located in St Ann, St Mary, Westmoreland, Trelawny and Portland.

Sykes said that the centres will reduce the number of cases that go before the courts, through the provision of mediation services.

“This centre is here to help persons who come in conflict with the law to find another means of having the dispute resolved and everyone being satisfied, but without the persons having a conviction.

“I urge the [Justice] Ministry to complete the other eight [justice] centres so that the figures in the courts can improve,” he added.