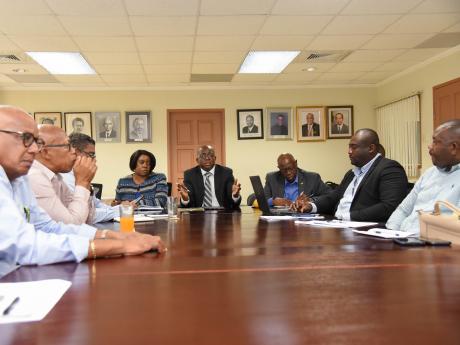 Minister without Portfolio in the Ministry of Economic Growth and Job Creation, Senator Pearnel Charles Jr. (centre), addresses a meeting with political representatives from St Thomas and officials from the National Water Commission, the Rural Water Supply Limited, the Water Resources Authority and the Jamaica Constabulary Force on July 16, 2019, at his New Kingston office - Contributed photo.

Minister without Portfolio in the Ministry of Economic Growth and Job Creation, Senator Pearnel Charles Jr., says the Government has approved additional funds to truck water to communities affected by the drought.

“We have given the commitment to have immediate allocation to support the urgency in the specific divisions, and we are going to be holding the NWC [National Water Commission] and the RWS [Rural Water Supply Limited] to account, to ensure that they meet the timeline that they have articulated to the various stakeholders, to provide water to the people,” he said.

He was speaking with JIS News after a meeting with political representatives from St Thomas and officials from the NWC, RWS, the Water Resources Authority and the Jamaica Constabulary Force at his office in New Kingston on Tuesday.

Charles Jr. underscored that the move is to “impact the communities through emergency trucking, and more importantly, to do those minor repairs that can alleviate the need for investment in trucking water”.

He pointed out that during his recent meetings across the island with stakeholders and agencies under his Ministry, persons consistently cited deficiencies in the maintenance of the water infrastructure and “breaches of our systems”, so there will be increased focus on upkeep.

Charles Jr. said the JCF has given its assurance to work alongside the NWC enforcement team,and to ensure that when information is passed on to them, “immediate” action is taken.