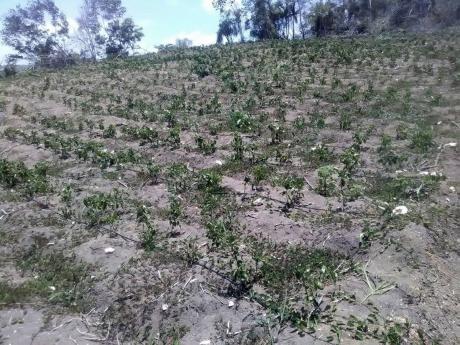 Farmers in St Mary are being dealt a double blow and are urgently appealing for help to salvage what they can of an already ravaged season for their crops. With their crops scorched on one side by the prolonged drought, several farmers across the parish are faced with fires, which they say are further threatening their livelihood.

With vegetables such as pumpkins, tomatoes, peppers, carrots, pak choi and legumes literally drying up in the fields, and other crops such as plantains and bananas already wilting under the heat, fires would be the last thing that farmers would want to experience. But that is the reality in many sections of St Mary.

“We’re having a lot of fires and I don’t think it’s just bush fires, I think it’s people lighting them,” insisted Marvalee Russell, president of the Elliott Farmers Community Enterprise. Russell said the long-term effect of the fires will be seen later.

“There are a lot of fires throughout the entire parish,” Luke said.

It is unclear what percentage of the crops has been affected by the bush fires.

Deputy Superintendent Andrew Wildman, who is in charge of the St Mary Fire Department, confirmed an increase in bush fire calls in May, June and July this year, as against the two previous years.

“Yes, I can confirm that we’re getting more (fire calls) than we’re accustomed to,” Wildman told The Gleaner on Wednesday.

“Overall, fire calls have increased over the past two months – 75 in May, 140 in June and 140 up to July 15. The majority of the calls would have been for bush fires.”

The number of bush fires for the month of June has shown a drastic increase over the three-year period, 2017-2019.

“And we’re on track to exceed that amount (123) for this month, July,” Wildman cautioned.

The Elliott farmers group, which consists of over a dozen active farmers, along with several teachers and students, operate in areas such as Kilancholly, Highgate, Richmond, None Such, and other areas of St Mary.

The effect of the drought is felt throughout.

“We’re under serious drought, all the farmers,” Russell pointed out. “We’re having the drying up of plants, even with whatever little water you can get, the productivity has been greatly reduced.”

The group plants crops such as plantain, pak choi, tomato, papaya, pepper and carrot, and all are affected.

“Even sweet pepper in greenhouses, that is drip but we’re still having problems because it is extremely hot.”

Luke, who actually toured several areas of the parish on Monday to get a firsthand look, admitted that conditions are terrible.

Luke, in the meantime, is urging farmers groups in St Mary to contact his office in order to get some assistance to alleviate the drought, after the Ministry of Agriculture allocated funds for this purpose.

“They (Ministry of Agriculture) have dispersed the funds so the parishes should begin activities as it relates to assisting the farmers,” he disclosed. While this is happening, Luke said the main focus of RADA now is on water harvesting.