Be passionate about what you do – Roberts 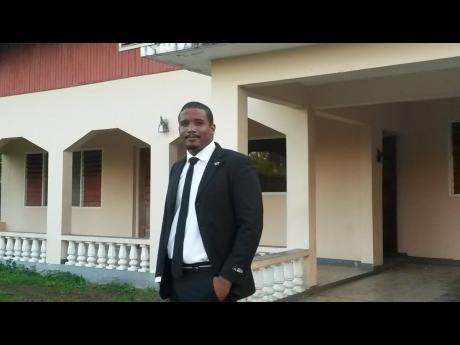 “Excellence is never an accident. It is always the result of high intention, sincere effort, and intelligent execution; it represents the wise choice of many alternatives - choice, not chance, determines your destiny.”

Errington Roberts would agree with Aristotle because as long as he can remember, his sincere efforts, coupled with his intelligence, have only resulted in excellence.

Originally from Enfield, St Mary, and attending the primary school there, Roberts saw the importance of education and took on the responsibility of helping his mother by farming.

“As a little boy, I used to farm with my mother so that I could have money for school,” said Roberts.

When he got to the fifth grade, Roberts was moved to the May River Primary School, where he sat the Common Entrance Examinations, and was the only student who was placed in a high school.

“I passed for Buff Bay High School, where I did technical subjects before graduating at age 15,” Roberts stated.

He was not sure of what direction to take, therefore, Roberts worked at his alma mater for approximately three months as the handyman. However, one teacher out of concern, told Roberts to go to university.

“One day, Mrs Nadine Molloy Young saw me and told me that she did not want to see me on the school compound anymore and that I should go to university, so I enrolled in the National Youth Service (NYS) programme,” Roberts shared.

While in the programme, Roberts was asked if he wanted a scholarship to study sports medicine in Cuba, but he declined the offer because the programme was not his passion.

“I have a principle that you should love what you do because if you don’t find what you are passionate about, you won’t be happy with yourself,” Roberts said.

As a result, he completed the NYS programme and went back to work at the Buff Bay High School as a clerk in the bursar’s office. He was then sent to a Dr Frazer, who recommended that he visit the Cuban embassy to find out whether he qualified for a scholarship.

Upon receiving the scholarship, Roberts left for Cuba in 2005 and was the only person studying telecommunications.

“I struggled the first year because of the language barrier, but I was also determined because one of my Jamaican counterparts, during introductions, told me that nobody passes telecommunications and that it would be best if I just went home,” Roberts shared.

According to Roberts, he did exceptionaly in his studies as he completed his degree in telecommunications and electronics with a 4.1 grade point average.

“It was a government scholarship, so I was expected to work in Jamaica for five years, but I could not get a job in the field, so I went back to Buff Bay High School and taught technical drawing and electrical technology for four months,” he explained.

Then the unexpected happened! Roberts got an email from the university he had attended in Cuba, inviting him to complete his master’s degree in telecommunications system there.

“When I completed my master’s and came back to Jamaica, I did not go job hunting for about a month, I just farmed.”

He soon landed a job at one of Jamaica’s popular radio stations but left three years later without knowing where he would go. It was not until a friend of his called that Roberts knew what his next step would be.

“A friend of mine who worked with JPS (Jamaica Public Service) called me saying they needed an interpreter, and I jumped at the opportunity, but that job lasted for only three months,” he said. “I found out later that JPS has a telecommunications department, so I spoke to my supervisor, who then referred me to someone in the department.”

Roberts spoke with the head of the department and got an interview.

“He asked me one question; ‘What can you do for the department?’, and when I answered, I was told to start the following Monday as project engineer,” Roberts stated.

Since then, Roberts has been promoted to network engineer for smart grid project and services. He is still involved in farming and now has a family.

“I always encourage people to pick an industry, not just a job. In an industry, you will grow to what you set out to achieve, but with a job, it’s just what that job has to offer,” Roberts advised.