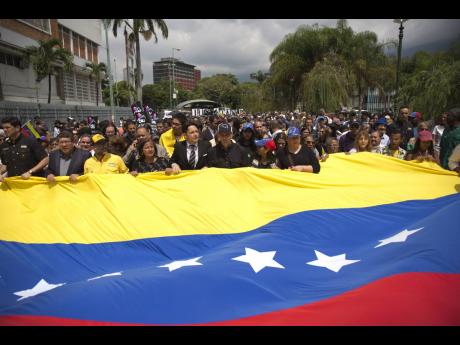 File
Opposition leaders and friends hold a giant Venezuelan flag as they walk behind the hearse containing the remains of opposition activist Fernando Alban, during his funeral in Caracas, Venezuela, last year. 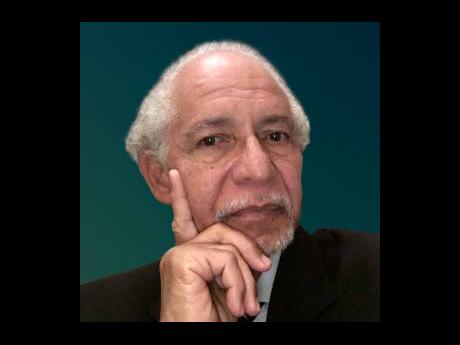 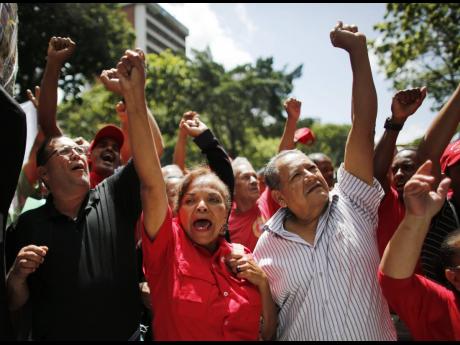 File
Supporters of Venezuela’s president, Nicolás Maduro, cheer in his favour as they march to the Miraflores Presidential Palace in Caracas, Venezuela, last year. 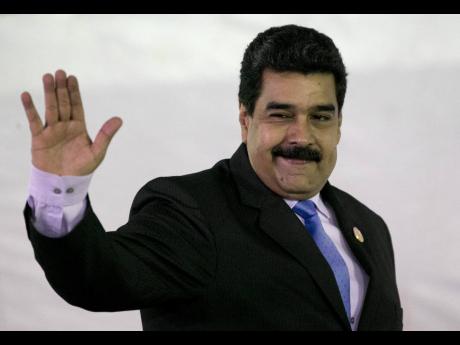 The vote in the Organization of American States General Assembly (OASGA) in Medellin, Colombia (June 26-28), to accredit the designee of the National Assembly of Venezuela is a retrograde step for the OAS. It further erodes any slender possibility where the OAS had to play an impartial role in seeking a negotiated settlement of the Venezuelan crisis.

This latest vote is yet another in a series of divisive and controversial votes in the OAS, adding to an already difficult path to ending the Venezuelan crisis through peaceful diplomatic means. At least, any role for the OAS as peaceful broker has all but disappeared. The vote at the OASGA compounds an already extremely difficult process for those who still hope for a negotiated resolution of the crisis. It fulfils the stated position of the United States and the controversial OAS Secretary General, Louis Almagro, that negotiations are a waste of time.

The vote sparked a withdrawal from the Assembly by Uruguay,the co-chair of the Montevideo initiative which seeks a negotiated settlement. It undercuts any hope for the Montevideo initiative going forward and promotes regime change, the US objective, as the desired end game on the table. It also creates further disunity in the OAS and lays bare the lack of objective capacity for the organisation to deal with crisis situations in the hemisphere.

Each vote in the OAS, for the most part, reflects the overall influence of the United States in the organisation and the hemisphere. It’s either that members of the organisation support the US position or they find themselves marginalised and ostracised. In looking at this current state of conflicting principles in the votes in the OAS, one cannot fail to recall the intimidatory remarks at the United Nations by former US Permanent Representative Ambassador Nikki Haley. She was unequivocal in stating that governments must back the US or face consequences. Countries in the region that are highly dependent on the US for trade and security assistance, as well as those that harbour autocratic tendencies, quickly fell in line. Some of these countries have been reduced to obsequious leaders, devoid of principles long held by former leaders, of their countries.

Small countries in the region, in particular CARICOM member states, are struggling to maintain any semblance of unity on Venezuela. Heads of government and foreign ministers issue well-crafted statements defending long-held principles of sovereignty and non-interference in the internal affairs of states. The joint statements insist that any military intervention in Venezuela to effect regime change is anathema to the principles enshrined in the charters of the United Nations and the OAS; and collectively, they align with the Montevideo initiative for a negotiated settlement of the Venezuelan crisis. But, when called upon to vote in the OAS on Venezuela, some of them seem to have abandoned most of these principles.

Yet, small countries have a vested interest in maintaining fealty to international norms, without which the big and mighty countries would be unchecked in running rough shod over their sovereignty. That is not to say these countries are not vulnerable no matter what. However, large powerful countries generally restrain themselves from overt bullying, mindful of how they are viewed in the international community. But these are not normal times, and it is rare that the US State Department promotes policies that disdain international norms.

The Donald Trump administration uses the economic and security vulnerabilities of small countries in the region to divide them. The recent invitation to four CARICOM leaders, plus the president of the Dominican Republic, to visit Mar-a-Lago was intended as a message to the region that those who support the US would be accorded some token of appreciation. It is hoped that those Caribbean leaders who visited Mar-a-Lago appreciated that they were simply being used as props to induce others to fall in line. The highly critical responses from some of the non-invited CARICOM leaders exposed the level of disunity in the region. Countries that normally were the bastions of those inviolable principles have become pawns in Trump’s hemispheric game. Their presence at Mar-a-Lago exposed the level of disunity in the region, flying in the face of the CARICOM Treaty.

A dangerous and despicable game it is!

I find it difficult to believe the Trump administration has any genuine concern for the humanitarian crisis in Venezuela or elsewhere. We don’t have to look beyond the gross human-rights violations being perpetuated on the border with Mexico. The Trump administration’s claims of concern about the humanitarian crisis in Venezuela contradicts its deliberately imposed draconian measures on the S border and the inhumane treatment of migrants from Central America, especially children and women. If the Trump administration was truly concerned about human rights and humanitarian conditions, it should allow UN human rights investigators access to US immigrant detention facilities as Venezuelan president Nicolás Maduro has with the access granted to UN High Commission for Human Rights to freely investigate the human rights situation in Venezuela.

Reflecting on the OASGA vote, it is not clear what purpose Jamaica sought to serve by its amendment to the Resolution on Venezuela that was first adopted by a simple majority in the organisation’s Permanent Council and then endorsed in the same way at the Assembly, causing many countries, including nine CARICOM states, to register their objection formally and stating that they will not be bound by its terms.

The resolution seated a representative of Juan Guaidó and the National Assembly in violation of customary international law and practice and in disregard for the charter, of the OAS and the rules of the organisation. In an attempt to cover its abandonment of these principles, Jamaica proposed that the National Assembly’s representative would be recognised “until elections are held”. It was a disingenuous attempt to cover-up its departure from principles and law.

Jamaica, breaking with its progressive and independent foreign policy of the past, joined in an alignment with the US to seat a representative named by the Venezuelan National Assembly. And, Jamaica’s vote provided a slender and simple majority? It joined the Haiti government, which is highly dependent on US patronage not to pursue serious corruption allegations; the Bahamas, traditionally more US-Aligned than Caribbean; and St Lucia whose government has been trying to reverse US Congressional sanction that deprives it of US aid.

The Venezuelan crisis will continue to be a problem for Jamaica and the rest of CARICOM. The prime minister of St Lucia, the new chair of CARICOM, has been one of the ardent supporters of the US position on Venezuela. The outgoing chair’s call for the organisation to maintain unity in opposition to external intervention in Venezuela and for support of a negotiated settlement of the impasse, may have fallen on deaf ears. With its 14 votes in the OAS splintered, perhaps it is already too late now for CARICOM to find unity. With each vote in the OAS, with Jamaica and the other three CARICOM countries siding with those countries advocating for regime change at all costs, the possibility of a diplomatic resolution of the Venezuela crisis drifts further away.

Ambassador Curtis Ward is a former ambassador of Jamaica to the United Nations with special responsibility for Security Council affairs.